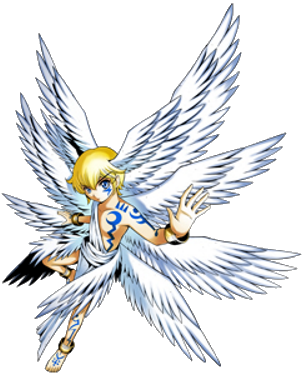 Lucemon is said to have descended to the ancient Digital World long ago, it is an Angel Digimon which has the appearance of a child. It manifested in an era in which the Digital World was still chaotic, and it is said that it brought about order and harmony. However, a long period of darkness was summoned due to Lucemon's later "Rebellion". Although it has the appearance of a child, the power and intelligence it possesses surpass even that of a Perfect Digimon. It is said that Lucemon's abilities have now been inherited and split among the Three Great Angels. 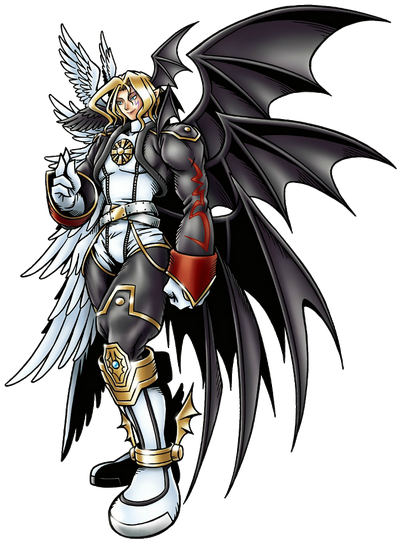 The strongest of the "Seven Great Demon Lords", it is an ultimate Demon Lord Digimon which possesses both the divine and the diabolic. It instigated a rebellion in the far-flung past, and so it was sealed in the Dark Area along with many other Demon Lord Digimon. Its power exceeds that of Ultimates, and is said to rival that of the existence called "God" as well. It has a contradictory existence, in that one side of it loves all things, as God does, while the other is trying to destroy the whole world, as the Devil does. Hence, once it destroys this world, it intends to create a fresh new world. 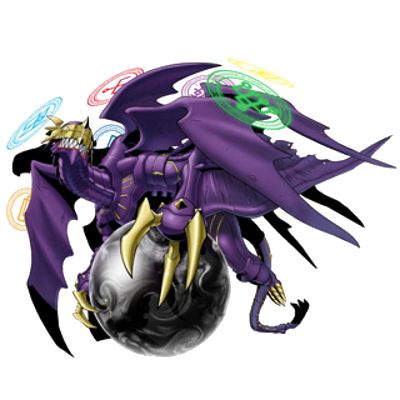 Having the appearance of the dragon of Revelation, it is Lucemon's final form. As was told in the Revelation, it carries the Crowns of the Seven Deadly Sins upon its head, and it holds the orb of darkness, "Gehenna", which absorbs all attacks. All attacks are nullified before the Gehenna, and it is said that the world will perish when Lucemon takes this form. However, Lucemon's true form (Lucemon Larva) exists within the Gehenna, and Satan Mode is no more than Lucemon's shadow. Therefore, no matter how many times Satan Mode is attacked, those attacks will not reach the true form, Lucemon Larva. 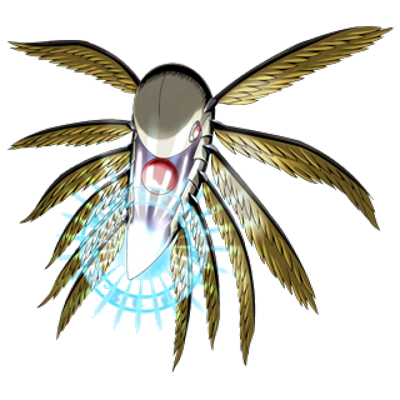 The true form of Lucemon which operates Satan Mode as its shadow. It hides itself within the orb of darkness carried by Satan Mode, "Gehenna", and its existence is said to be the epitome of Lucemon's evil will. 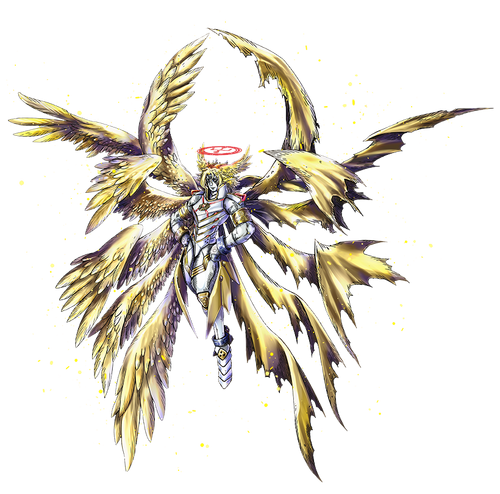 Although it is a Demon Lord-type, the way in which its six pairs of golden wings shine is divine like that of an Angel-type. Not only does its appearance far surpass that of the old Lucemon, but also its power and intellect, and has sublimated into the perfect being that transcends even God. Having gained the ultimate wisdom and power to do absolutely anything at will, Lucemon reigns in the Digital World as an incarnation of destruction and creation.

Gender: Technically genderless, but presumed and treated as male in the translations

Superhuman Physical Characteristics, Digimon Physiology, Immortality (Types 1, 3 and 8. Despite being in his Rookie form, Lucemon is still tied to his Sin of Pride. It was said that as long as malice exist in the Hearts of Man, Lucemon would be immortal and infinite, Lucemon also embodies nonexistence and darkness as well as bad feelings. Demon Lord resurrection is noted to be extremely fast, usually only taking minutes to return. Falldown Mode (and by extension Rookie) itself is merely an Avatar of Lucemon Satan Mode), Conceptual Manipulation (His presence created the concepts of good and evil in a world in which neither existed, can destroy non-existence as well. Commands the Concept of Pride), Regeneration Negation (Mid-Godly. Denies the return from non-existence), Light Manipulation, Flight, Energy Manipulation and Energy Projection, Telepathy (Called the aid of Dynasmon from far away), Healing, Morality Manipulation (Forcefully turned Cherubimon evil), Sealing (Sealed Huanglongmon into the Earth), Can create and control the movements of celestial bodies, Bypasses Magical Defenses with Grand Cross and Dark Lightning, Can travel through Shadows/Darkness, Acausality (Types 1 and 3), Regeneration (Mid-High), Electricity Manipulation, Ice Manipulation, Black-Hole Creation, Sound Manipulation, Dimensional BFR, Pocket Reality Manipulation, Reality Warping, Space-Time Manipulation, Body Control, Teleportation, Fire Manipulation, Age Manipulation, Healing, Flight, Gravity Manipulation, Weather Manipulation, Memory Manipulation, Soul Purification (Only works on evil beings), Portal Creation, Limited Probability Manipulation via Destruction, Explosion Manipulation (Can recreate the Big Bang), Existence Erasure, Resistance to Death Manipulation, Power Nullification, Absolute Zero, and BFR (Defeated the 10 Legendary Warriors, who perform abilities such as the aforementioned listed casually).

All previous abilities amplified, Transformation (When defeated, Lucemon Falldown Mode will enter Satan Mode), Nonexistent Physiology (Complete. Lucemon completely embodies the Dark Area in which is nothingness itself), Regeneration (Mid-Godly. Re Digitize Lucemon has the abilities of UlforceVeedramon and as such regenerates so fast that even instantaneous deletion cannot keep up with it), Darkness Manipulation, Power Nullification, Conceptual Manipulation (His presence created the concepts of good and evil in a world in which neither existed, can destroy non-existence as well. Commands the Concept of Pride and is nothingness itself. Satan Mode and Lucemon who has the power of all the other SGDL has the power of all the sins of the SGDL. This means Lucemon controls the sins of Lust, Envy, Wrath, Greed, Sloth and Gluttony and can inflict them onto the opponent), Telekinesis (Telekinetically tossed Kaiser Greymon and Magna Garurumon like a ragdoll), Attack Reflection (Completely haulted and reflected attacks with ease), Electricity Manipulation, Matter Manipulation, Transmutation, Portal Creation, BFR (Can BFR opponents to the Dark Area who then are erased and become apart of his body), Duplication, Transformation, Void Manipulation (Can swallow entire universes into non-existence), High Resurrection Negation (The Demon Lords have the unique power to end the cycle of reincarnation and rebirth, and any foe they kill are banished to the Dark Area), Space-Time Manipulation (One with the entire Dark Area and can consume entire universes, as well as recreate space-time), Sleep Manipulation (Via Eternal Sleep), Limited Probability Manipulation (Dead or Alive has a 50/50 chance of killing the opponent or wounding them to the point of incapcitation), Master Hand-to-Hand Combatant, Enhanced Senses, Fire Manipulation, Can tear through dimensional walls, his presence wreaks havoc on electronics, Resurrection (If destroyed his body can be reformed from the data of its victims with enough time, but can also be recreated from a human and the Code-Key of Pride), Size Manipulation, Empathic Manipulation, Hellfire Manipulation, Mathematics Manipulation, Chain Manipulation, Poison Manipulation, Teleportation, Illusion Creation, Aura, Summoning, Gravity Manipulation, Magic Manipulation, Sound Manipulation, Fear Manipulation, Dream Manipulation, Water Manipulation, Air Manipulation (Has effectively absorbed the powers of the rest of the Demon Lords), Power Nullification and Transmutation via Regression Shining Laser, Can turn resistances into weaknesses and vice versa via Purging Gale Storm, Existence Erasure, Chaos Manipulation, Resistance to Conceptual Attacks (Resisted getting his very concept attacked by Boltboutamon), Existence Erasure, Power Nullification (Can resist the effects of Particle Worm despite this being something that threatens even the likes of Beelzemon, forcing him to obtain the X-Antibody to survive. Particle Worm also negates the powers of all those effected. Was completely unaffected by Magna Garurumon's "Starlight Velocity" attack, which erases enemies from existence)

All previous abilities, Attack Nullification and Absorption with Gehenna

All previous abilities + The abilities of UlforceVeedramon.

All the powers from before, but vastly superior, Omnipresence.

Standard Equipment: None notable | Gehenna in Larva Form, a durable black sphere that guards the much more vulnerable Lucemon Larva while it controls its Shadowlord Form

Intelligence: Lucemon is extremely manipulative and crafty, enacted a successful scheme to defeat or control the three Celestial Digimon (who are facets of his powers) and would have succeeded in absorbing the Digital World if not for the intervention of Susanoomon, as he grows more powerful his rational judgment is clouded by his vanity as the Demon Lord of Pride.

Feats: Casually defeated the DigiDestined until they merged into Susanoomon, In Digimon Savers: Last Mission was going to force entirety of the Human World and Digital World into the Dark Area (the place where every piece of destroyed data goes since the origin of the Digital World)

Overwrite: All Digimon can rewrite their data, so that they are able to react to various situations that were once problematic for it. This usually causes a gigantic increase in power and sometimes new skills and resistances are gained. However, the more emotional the Digimon is, the more violent the overwrite becomes. Considering Lucemon is an Ancient Digimon, he has this ability to a ridiculous level allowing reactions to the emotions to be much faster and guarantee a much greater power increase than most Digimon can reach in a short time.

Note: The respect thread that covers all of his incarnations can be found: here. This thread covers virtually everything within this profile, but in greater detail, with visual reference.