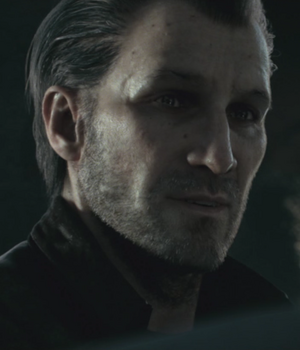 Lucas Grey (also known as the Shadow Client) is the main antagonist of HITMAN™ turned tritagonist in HITMAN™ 2. He is an older male assassin, who leads his own Private Militia in a war against Providence. He is the childhood friend of Agent 47. He is later on revealed to be Subject 6, a clone who actually successfully managed to escape Dr. Ort-Meyer, at the cost of 47 having being captured and having his mind wiped.

Tier: 9-B physically, higher with melee weapons, firearms and preparations

Powers and Abilities: Superhuman Physical Characteristics, Extreme Pain Tolerance, Master Martial Artist, Master tactician and strategist, Master survivalist, Master hunter, Master deceiver, master manipulator, Pressure Point Strikes (Has innate knowledge on human anatomy and can easily strike at his enemies' pressure points to knock them out or even kill them), Expert Acrobat (While he may not look like much, Lucas is capable of quickly climbing up buildings, latching onto pipes and performing several more feats of acrobatic strength. Easily infiltrated and robbed a high-security Providence vault and left, with no one knowing that it was even robbed in the first place until it was opened), Extraordinary Genius Intellect, Multi-Lingualist, Weapon Mastery, Vehicular Mastery, Stealth Mastery, Regeneration (Low), Longevity (Several other comparable clones were noted to be modified to live far longer than the average person, with Lucas himself having been noted to be the same case), Hacking, Limited Technology Manipulation (Capable of using any kind of technology known to man), Vehicular Mastery, Enhanced Senses, Information Analysis, Minor Precognition and Perception Augmentation with Instinct (Much like 47, Lucas also possesses Instinct, which allows him to pinpoint objects and locations of interest, pinpoint weak-spots, gain information from objects, people and whatnot, identify targets, accurately locate trails before they even form, allows him to be disguised in sticky situations, see in pitch-black conditions etc. His other senses also greatly help in utilizing Instinct to his maximum potential. Capable of tracing trails gone cold. Can even slow down time to a crawl, although this doesn't work on enemies who are comparable to him) and several thousand more abilities and skillsets (Was made alongside 47 to be the perfect human specimen, thus being capable of doing anything humans have ever done), Indomitable Will (Will stop at nothing to achieve his goals, and much like 47, he can overcome his pain with sheer willpower alone), Preparation, With preparation he gains Poison Manipulation, Electricity Manipulation, Fire Manipulation, Sound Manipulation, Fear Manipulation (With toxins), Madness Manipulation, Disease Manipulation, Sleep Manipulation, Sleep Manipulation, Explosion Manipulation etc., Resistance to Poison Manipulation and Disease Manipulation (Possesses 47's innate resistances to all potent toxins and human diseases), Mind Manipulation and Mind Control, Extreme Heat (Has survived sticky situations involving intense desert heat, exploding buildings and whatnot, much like 47), Cold Temperatures, Electricity Manipulation (As he was made with the same elements as 47, Lucas should be able to resist electricity much like him), Fear Manipulation, Empathic Manipulation (Most of the time, he feels no emotion over his deeds believing that they would compromise his capacity to perform kills) and several other resistances (Was made to be the perfect human specimen with all of humanity's resistances. Possesses the same resistances as 47 due to having been made of the same genetic materials)

Attack Potency: Wall level physically (Is the only person capable of defeating 47 in unarmed combat and is capable of doing anything 47 can to a far higher degree), higher with melee weapons, firearms and preparations

Speed: Superhuman with Supersonic+ combat speed and reactions (Was capable of easily catching 47 by surprise). Supersonic to Supersonic+ attack speed with firearms, higher with preparations

Lifting Strength: At least Class 1 (Can perform the same feats as 47 and overpower him)

Standard Equipment: Heckler and Kock PSG-1, .44 Magnum, Smith & Wesson Model 500, anything he can get his hands on during a mission

Intelligence: Extraordinary Genius. Is well-trained and educated far beyond peak human norms, and possibly even beyond 47's comprehension. Knowledgeable about anatomy, poisons, various weapons and firearms. Resourceful and imaginative when looking for a way to infiltrate a place or kill his target. Like Agent 47, he too was heavily trained in unarmed combat, counter-intelligence, counter-insurgency, assassinations, guerrilla warfare, reconnaissance, infiltration, interrogation, multilingualism, discipline, and even other mercenary works, and this is one of the few fields where he trumps over 47. Much like 47, he is even skilled in non-combat activities, which comes in handy during his missions. Capable of planning intricate and extremely difficult missions without ever losing focus, and has been noted to be so successful at his job that he is essentially regarded as a non-existent entity when 47 initially hears of him. One his most profound traits is that he is truly a master strategist and his high intellect even allowed him to deduce the existence of Providence, whom themselves are hypothetical even by the standards of the world's top-level Intelligence Agencies. Possesses innate knowledge on human anatomy, and has mastered the art of stealth to greater degrees than 47 himself. Is also experienced in every sector of science, politics and other various works thanks to his first-hand experience with Providence. He read an entire Providence vault teeming with thousands of files containing such information within mere moments, and easily escaped it without alerting anyone in the process, and did all this just to declare war on them.

Weaknesses: Unlike 47, he is constantly guilt-ridden over his actions. He will put himself in harm's way to protect the ones he cares about, especially 47. Rarely shares his feelings with anyone as he believes they will compromise his mission. His Instinct can't slow his perception on enemies who are as fast as him. His precognition is only useful in pinpointing trails.