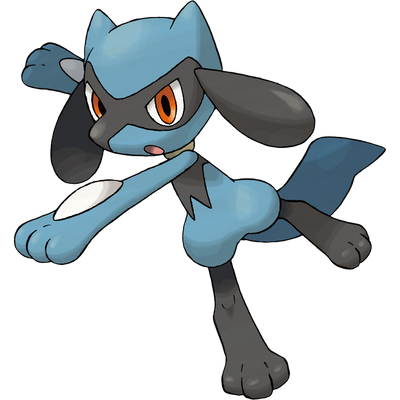 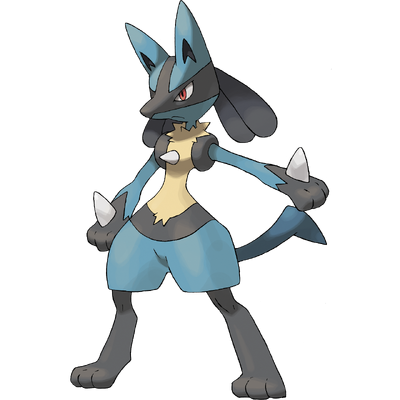 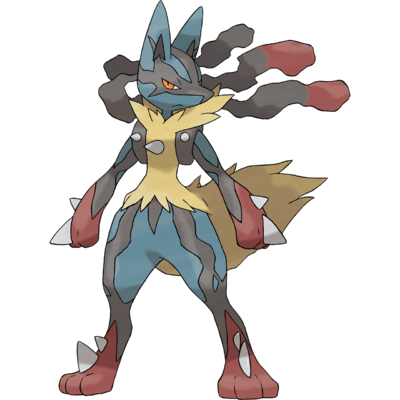 Lucario's name seems to be based on the mythical metal Orichalchum and oracle (note how the first syllables phonetically have "aura" in it) reversed in its Japanese transliteration. It can possibly also come from the Greek word for wolf (Lykos) lupaster, a subspecies of Canis aureus, Cairo or pharaoh due to its Egyptian appearance, or the Latin word lucareus (meaning one of light or a luminary), alluding to its aura powers. Its appearance is based on a jackal, even going so far as to be reminiscent of the Egyptian god Anubis, and might also be based on Egyptian boxers. The orichalcum is presumably what makes it Steel- type, and it's likely what makes up the spikes growing out of it (along with likely more of its body).

It has the strange ability to sense the aura of other living beings, allowing it to track their movements without any of its other senses. It is a rather noble Pokémon, with fists and nerves of steel. Lucario has also shown to fully understand human speech and languages, and often communicates with people through telepathy. It is considered to be a very rare and powerful Pokémon, among the peak of non-Legendaries. It used to be occasionally mistaken by fans for a Pseudo-Legendary, or even a true one. Lucario evolves from the baby Pokémon Riolu (making Riolu the only baby Pokémon to have an evolution that can Mega Evolve) once it has maxed out its friendship with its trainer and grows stronger during the day. Lucario is known in Kalos to be the first Pokémon that ever Mega Evolved (that's not named Rayquaza). If given Lucarionite to hold, it can Mega Evolve into Mega Lucario, heightening its already powerful aura, with the black streaks on its body showing the passage of aura and Mega Evolution energy throughout its body. However, it becomes heartless and cruel in battle in the process. Lucario is the only Pokémon who can (or could have, up until Gen VI) learned all of the aura moves.

Gender: Varies. Most of them, and all featured ones, have been male

All previous save for resistances, Resistance to Normal, Rock, Bug, Steel, Grass, Ice, Dragon, and Dark attacks, as well as Sleep Manipulation and Mind Manipulation (Used Aura to resist an Aegislash’s mind control and spread that resistance to other Pokémon), Sealing (Aura users have sealed the Pokémon Spiritomb [Spiritombs are a combination of 108 evil and dangerous spirits each, so it's somewhat impressive sealing] in the past, and Lucario is the Pokémon known for is aura, being the Aura Pokémon, so should be capable of doing the task if sufficiently powerful), Afterimage Creation, Fear Manipulation, Immunity (within reason) to Poison attacks, Being hit by dark attacks boost its attack, In its Mega Form, all moves matching its type do double damage, and can enter a Berserk Mode

Attack Potency: Building level (Capable of harming other Baby Pokemon like Cleffa) | At least Mountain level+ (Comparable to Tyranitar. Completely unfazed by Defog) | Large Mountain level (Stronger than Pure/Huge Power Pokémon and Marowak holding a Thick Club, should be comparable to other mega evolved Pokémon such as Mega Charizard. Mega Evolution gives it a giant power boost), higher via Adaptability

Stamina: Very High (Even as Riolu, they can crest three canyons and two valleys in one night. Pokemon can clear dozens upon dozens of floors in dungeons, each floor filled with numerous threats. Has significantly more stamina than Raticate, who can easily swim across oceans, and should have comparable stamina to Poliwrath, who experiences literally no stamina decrease)

Intelligence: Average | High for Pokémon standards (All Pokémon are naturally hardwired for battle, but Lucarios are capable of easily understanding human speech, among other impressive things. A lone Lucario is revered as the greatest adventurer of all time in Red/Blue Rescue Team. Riolu start training since babies and continue it throughout their entire lives to hone their skills)

Weaknesses: Weak to Fairy-, Psychic- and Flying-Type moves | Weak to Ground-, Fire- and Fighting-Type moves. A Lucario can lose control of its Mega form if it isn't used to the power, and its fighting style can be described as heartless. Whether this is a weakness or not is up for debate

(Can be disabled at will unless stated otherwise. Furthermore, given that Riolu is a potential main protagonist in Sky, it gets access to the said exclusive skills [that would coincide with its IQ group]) 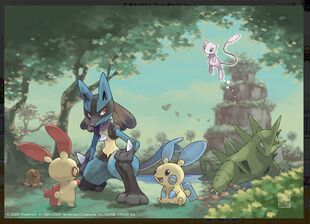 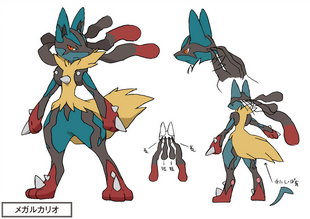 Nanami Yasuri (Katanagatari) Nanami's Profile (Base Lucario and 7-A With Akuto Bita Nanami were used, speed was equalized)

Trafalgar Law (One Piece) Law's Profile (Post-Timeskip Law and Base Lucario were used. Speed was equalized)

Monkey D. Luffy (One Piece) Luffy's Profile (Whole Cake Luffy was used, both could use their High 7-A forms)

Retrieved from "https://vsbattles.fandom.com/wiki/Lucario?oldid=7071056"
Community content is available under CC-BY-SA unless otherwise noted.