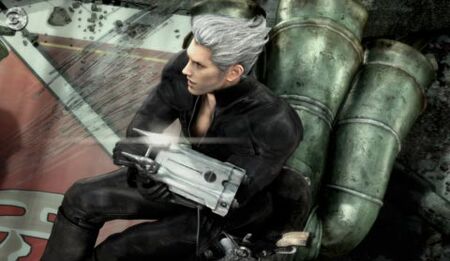 Loz is one of the Remnants of Sephiroth and the personification of his physical might and violent streak. Childish, emotional and impulsive, he follows his brother, Kadaj, along with Yazoo in his search for Jenova's remains, which they refer to as "Mother". Unbeknown to him, Sephiroth's will has been influencing his and his brother's actions, making them little more than puppets for the fallen SOLDIER. Fitting as Loz never questioned his purpose or the future that will come after they find Jenova, holding the belief that an answer will simply come once the time of their reunion is at hand.

Attack Potency: Solar System level (As a Remnant, Loz is an extension of Sephiroth's will, specifically his physical might. Could match and overwhelm a Geostigma infected Cloud when fighting him alongside Kadaj and Loz when the three of them were even toying around. When he faced Tifa, who had grown weaker since the events of the original game, he seemed to be outmatched at first, but quickly revealed to be playing around and quickly defeated her once he got serious)

Speed: Massively FTL+ (Could easily keep up with Cloud when the latter was infected with Geostigma. With his Warp Skill he could outpace Cloud and instantly blindsided Tifa)

Lifting Strength: Class G (Superior to a weakened Tifa Lockhart, as seen in their fight)

Striking Strength: Solar System class (His serious attacks were enough to knock Tifa out with a few moves, as well as trading attacks with a Geostigma infected Cloud)

Durability: Solar System level (Even though she was weakened, Loz still was unharmed by Tifa's attacks and several of her Limit Breaks)

Stamina: Very high. Despite fighting several battles against very strong opponents such as Cloud, the Turks or Tifa, all in a short period of time, Loz never showed any sign of exhaustion, despite taking quite a few hits in many of his battles as well.

Range: Standard Melee Range with the Souba, several dozens of meters with Materia.

Intelligence: Above average. While Loz has been described as a brawns over brains type of character and his childish nature is quite evident, he is still a very skilled fighter that can coordinate very efficiently with his brothers, Kadaj and Yazoo, when fighting together, as well as display a very proficient use of his weaponry and tools to adapt the different combat situations he finds himself in.

Weaknesses: Skill and technique aside, Loz is very simple-minded, impulsive and childish, many times looking to have fun in battle rather than winning. Provoking him is not particularly difficult and his style and strategy are very straightforward beyond occasional distractions to flank his opponents. Also, by being made of Negative Lifestream, Loz is very vulnerable to purification, just like his brothers, as seen how Kadaj was physically hurt by Aerith's rain when she cured Cloud's Geostigma.

Notable Attacks/Techniques: Being a martial artist equipped with a rather peculiar weapon, Loz has various moves at his disposal to use in battle, as well as abilities he shares with his brothers due to his nature as a Remnant of Sephiroth, along with the spells granted by the Materia stolen from Cloud:

Retrieved from "https://vsbattles.fandom.com/wiki/Loz?oldid=5355614"
Community content is available under CC-BY-SA unless otherwise noted.