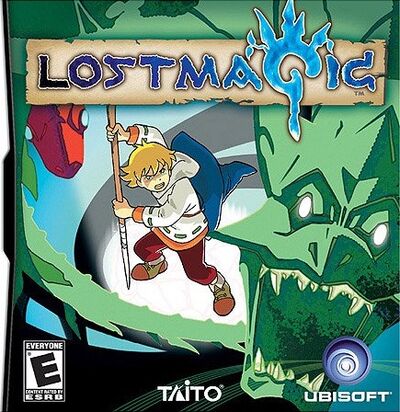 LostMagic (ロストマジック, Rosuto Majikku) is a real-time strategy role-playing video game developed by Taito Corporation for the Nintendo DS system. A spiritual successor, Takt of Magic (タクトオブマジック, Takuto obu Majikku), also developed by Taito but published by Nintendo, was released for the Wii in Japan. A sequel titled Lost Magic ～Concerto for the Fallen～ (ロストマジック ～精霊の協奏曲～, Rosuto Majikku ～Seirei no Ky～) was made by Taito for mobile phones in Japan.

This is a story of the age ushered in by the passing of the Great Creator, divine architect of our world. The people were long protected by the Six Forms of Magic and the Seven Wands left to them by the Creator. The wielders of magic, Magicians, maintained law and order. The Seven Wands were entrusted to seven especially powerful Magicians, called Sages, and passed down from one generation to the next. Thus the power of the Creator was kept safe, and the many benefits of magic made the people's lives rich and easy. In this way, a thousand years of golden, blessed peace continued across the world. But a fateful event was to forever change the world. The Diva of Twilight, a Sage and keeper of the Wand of Balance, lost all hope in those she was charged to protect, the people.

Disillusioned and angry, she called forth monsters - terrible creatures from another realm - into the world. The death knells of the golden age tolled across the land as the monsters ravaged towns and killed wantonly. Many of the other Sages, the defenders of the people, succumbed to the power of the Diva. Hope, now little more than a flickering candle, was about to burn out completely. Then, a youth by the name of Isaac appeared...

Isaac, a 14-year-old boy separated from his parents amid the chaos enveloping the world, is found by a venerable Magician who lives deep in the old forest. Taking him as her student, the Magician begins the boy's training in magic. Not long afterward, Isaac's father appears before him in the forest. Without saying a word he hands Isaac a Wand and then is gone. "What did father want to say to me?" Isaac wonders. His desire to find his father is about to spark a great adventure! For this is the story of hope, however small, in a world ravaged by despair.

The power of the verse can be divided into the different stages of the game. Early on, our hero and his monster stand at City Block level attack potency, due to being able to fight terraforming enemies who can create castles bigger than an entire forest, and Subsonic speed due to being able to dodge sound based abilities. Later on, they are able to learn advanced earth spells such as Star Fall, which drops stars from the sky into his enemies, which allows our hero and his enemies to reach Star level attack potency, in addition to Sub-Relativistic speed due to being able to dodge spells that involve sunlight and pure light. Finally, during the final chapter of the game, the Diva gains a part of The Creator's power, which allows her to recreate the universe anew, likely granting them Universe level+ attack potency, in addition to having gained Infinite speed due to scaling above the Ancient Dragons who predate the universe and exist without time. The God Tier of the verse, The Creator, sits comfortably at Universe level+.

Retrieved from "https://vsbattles.fandom.com/wiki/LostMagic?oldid=6492326"
Community content is available under CC-BY-SA unless otherwise noted.