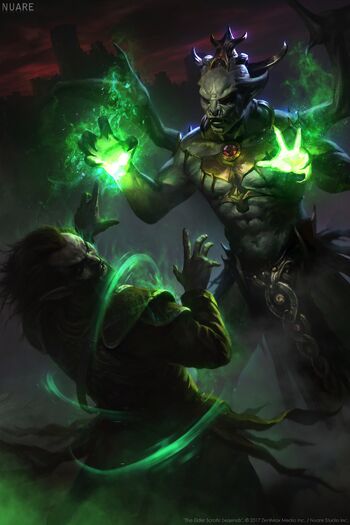 Lord Harkon is the master of Castle Volkihar and the primary antagonist of the Dawngaurd expansion of The Elder Scrolls V: Skyrim. His ultimate goal is to use his daughter as part of a prophesy foretold by the Elder Scrolls that would outline a way for him to blot out the sun, allowing vampires to reign over the day.

Regardless of the Dragonborn's choices, he attempts to eliminate them and Serana, which leads to his defeat and death.

Powers and Abilities: Superhuman Physical Characteristics, Immortality (Types 1 and 7), Life Draining, Telekinesis, Paralysis Inducement, Can turn into a cloud of mist & bats at will, BFR (Banished The Dovahkiin from his castle), Extrasensory Perception (Can sense life, undead, automation and corpses), Night Vision, Levitation, Blood Magic, Barrier Creation, Invisibility, Necromancy, Mind Manipulation, Can summon gargoyles, His talons/claws are poisoned, Transformation, Can infect others with vampirism, Statistics Amplification, (Able to boost his reflexes to the point where it seems everything is stopped around him), Capable of surrounding his body with bats that absorb the life of those nearby, Reality Warping (All magic comes from the caster exerting changes upon reality in accordance to their will), Resistance to Disease, Poison, Frost and Magic

Attack Potency: Multi-Continent level (Harkon's magic was powerful enough to banish Dovahkiin from his castle. A considerable threat to The Dovahkiin after their training at High Hrothgar, who can survive the voice of the Greybeards, and cause storms at the Throat of the World. Stated that his power and domain were 'infinite' in the past), can ignore durability with some of his magic

Speed: At least Massively Hypersonic+ (Fought and kept pace with The Dovahkiin. Vastly superior to soldiers who can react to and dodge arrows)

Lifting Strength: At least Class 1 (Can throw and choke Giants several times larger than himself to death with his telekinesis)

Striking Strength: Multi-Continent level (Can harm The Dovahkiin with his physical strikes)

Durability: Multi-Continent level (Withstood numerous hits from the The Dovahkiin in their battle)

Stamina: Presumably physically tireless. His Magicka regenerates faster than an average mage, as well as his stamina, although this is hindered when in sunlight.

Range: Standard Melee Range with his sword/claws, Tens of meters with magic

Intelligence: While he was entirely out of touch with the outside world for eons, he was supposedly capable of ruling over a large portion of Tamriel in the past, and is an experienced user of magic.