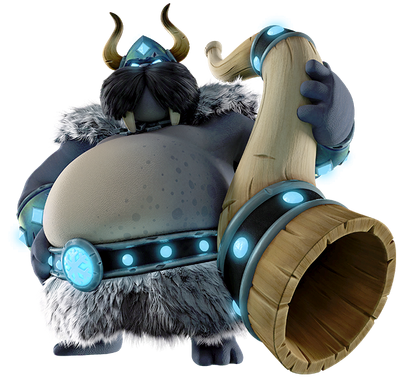 Lord Fredrik is the fearsome Waldough leader of the Snowmads and the main antagonist of the Donkey Kong Country: Tropical Freeze. With a fleet of ships and an army at his back and his enchanted horn, he has led conquests on several islands and always turned out victorious. His latest military strike was Donkey Kong's home, which happens to be on Donkey Kong's birthday. His invasion on the island has left the once tropical place coated in ice and snow into the point where even the volcano Tiki Tong used to reside in has been iced over. However, his conquest has been ceased by the Kongs.

Powers and Abilities: Superhuman Physical Characteristics, Can increase his size, Cryokinesis, Rams opponents with his helmet, Can summon ice dragons, a blizzard storm, and enemies.

Attack Potency: Country level (Easily turned DK Island into a frozen wasteland with an ice dragon he summoned from his horn, later fought with Donkey Kong)

Speed: Massively Hypersonic (Can keep up with Donkey Kong)

Intelligence: Above Average, as he leads an entire army and invasion.

Weaknesses: Occasionally gloats due to overconfidence.