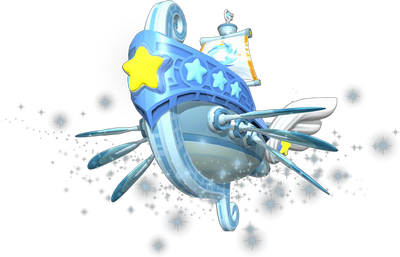 The Lor Starcutter is Magolor's spaceship. It crashes on Dream Land shortly after emerging from a dark, star-shaped portal in the sky, prompting Kirby and company to stop what they're doing and investigate.

Powers and Abilities: Superhuman Physical Characteristics, Non-Physical Interaction (Can affect Void Soul), Inorganic Physiology (Type 2), Self-Sustenance (Types 1, 2 & 3), Pocket Reality Manipulation (Its deck seems to have a small nebula or galaxy in it. The inside of the ship is bigger than how it looks from the outside. Has several rooms with this characteristic as well; its owner made a few unknown upgrades to the ship before it was introduced and he would later create many rooms bigger in the inside than how they are outside, some of them having many stars in them), Flight & Spaceflight, Portal Creation, Dimensional Travel (It can open dimensional rifts from Another Dimension to Kirby's universe & vice versa. Powered by 120 Energy Spheres when a few of them alone can create dimensional rifts), Time Travel (Stated to be able to time travel and suggested to be an already shown power. The dimensional rifts made by its Energy Spheres lost & recovered during Return to Dream Land made the Greater Doomer ended up in the Dream Kingdom in Team Kirby Clash Deluxe, that setting being "long, long ago" and somewhat medieval), Energy Projection, Forcefield Creation, Can remove parts of itself to use as projectile weapons, Air Manipulation, Danmaku, Size Manipulation

Attack Potency: Multi-Solar System level (The same incredible power that gave rise to the "clockwork stars" was used to contruct the Lor Starcutter. Initially fought Landia but lost back in Return to Dream Land. Used by a Master Crown-empowered Magolor to fight evenly and lose against Landia, although Magolor could have amped the Lor's power) | At least Multi-Solar System level (Used by Post-Star Allies Magolor to harm the likes of Void Termina, Corrupt Hyness, the retaliators Three Mage-Sisters [at once], Morpho Knight EX and the stronger incarnations of Void Termina)

Speed: Massively FTL+ (Scooped up Kirby and co. faster than interstellar parts of Another Dimension could collapse while flying at speeds comparable to Landia. Often shown flying at many times the speed of light)

Range: Interstellar with projectiles and shockwaves, Low-Multiversal with portals

The Lor's cameo in Star Allies, as portrayed by the official Kirby twitter
Add a photo to this gallery