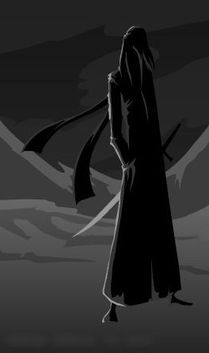 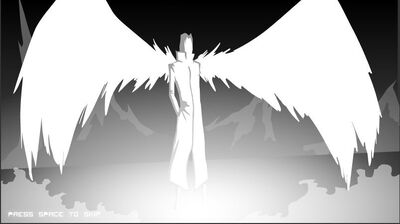 Lone Warrior is the central protagonist of the first game in the Armed With Wings series. The leader of the rebellion against Vandheer Lorde, he was killed by Vandheer in his first assassination attempt but was deemed worthy of being resurrected by Blackmist, becoming his chosen one and eventual avatar who would one day succeed in overthrowing his nemesis, and setting events in motion that would lead to his final defeat.

Speed: Massively Hypersonic+ (Capable of dodging Vandheer's lightning) | Omnipresent (Blackmist is the matter that everything is composed of)

Striking Strength: At least Multi-City Block Class, likely higher (Can hurt Vandheer Lorde with his punches) | At least Universal, likely Universal+ (Can hurt Network, who is the antithesis of Blackmist)

Stamina: Very high (Sprinted and fought across a large mountainous landscape in pursuit of Vandheer Lorde without tiring) | Limitless

Intelligence: Gifted. Is an extremely skilled swordsman and warrior and led a successful rebellion to take control of Vandheer's empire. Is a master of the God Cutter and God Fist fighting style, which are difficult to control. | Omniscient

Weaknesses: His sealing spell only lasts 3 minutes, and can be shattered from within by a sufficiently strong opponent (Although this might be because of Network and Vandheer's power and not necessarily him being weak) | None notable

Key: Base | Armed With Wings