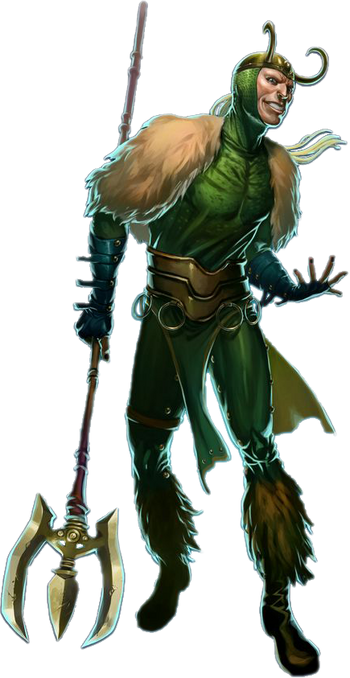 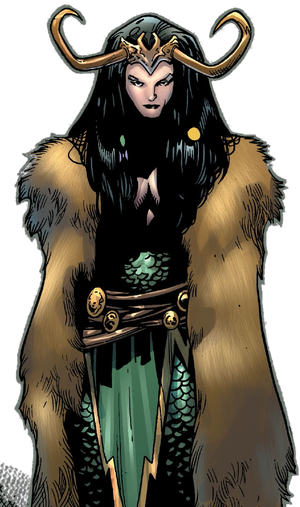 "After Odin, All-father of the Norse pantheon, slew the evil frost giants, he discovered they hid a human-sized baby in their midst. Odin took the child back with him to the gods' home of Asgard and adopted him, under the name of Loki. The boy grew into a skilled sorcerer, shape-shifter, and one of Asgard's staunchest defenders, often deploying his magics alongside the might of his foster brother Thor. But the mercurial God of Mischief could hinder the Asgardians, as much as help them, as when he tricked the blind god Hoder into slaying the otherwise invulnerable Balder with an enchanted spear made of mistletoe. And so the gods never fully trusted Loki. Yet in his selfish narcissism, he convinced himself it was Thor who stole his glory from him. If the thunder god fell, or so he thought, the love, and crown, of Asgard would be his. Thor's departure from Asgard to become guardian of Earth gave the god of mischief the perfect opportunity to slay him out of their father's sight. His repeated attacks on the thunder gods, and the mystical empowerment of Thor's enemies, have made Loki one of the greatest threats to our world as well as Asgard!" - Origins of Siege: Loki by Fred van Lente

Gender: Male, female for a short period of time while possessing Sif's body

Attack Potency: Solar System level (Almost comparable to Thor physically, as he has fought Thor-level beings on relatively equal terms such as trading blows with Thor, knocking down Silver Surfer with one blow, breaking out of Apocalypse's restraints, and easily overwhelming Eric Masterson Thor. His shake of pain made Asgard tremble while restrained far away from the Capital of the realm. Stronger with magics, as he could blast away Beta Ray Bill, Eric Masterson Thor and Dargo with a single energy blast, KO-ed Beta Ray Bill with one magical attack, fought against a serious Surfer, weakened the magic of Nobilus who was created with Thor's cell samples, and enchanted the air to create eruptions that could bring Thor down). Several equipment also allow him to rival or even overwhelm Thor physically.

Lifting Strength: Unknown, possibly Class Y+ via scaling from Thor (While relatively comparable to Thor physically, Loki does not display many lifting feats)

Range: Standard melee range by himself (193 cm tall), offensive magics can be anywhere between Extended Melee range and Multiple Planetary Diameters, psychic abilities can be between Intergalactic and Universal (Such abilities often work on Earth despite Loki being on Asgard, the two locations being "endless galaxies apart" or even "separate universes" depending on story)

Intelligence: Extraordinary Genius (Loki is a master of magics, potions and science. Has created potions to grant powers to dangerous villains such as the Absorbing Man, built a scientific device capable of transmuting Thor into a frog, and has ensnared Reed Richards in "mathematical conundrums that render him unable to even comprehend anything beyond his own failing computations". A master schemer and manipulator, to the point that he manipulated Hela and Mephisto to strike his name from the Book of Hel so that his demise at the hand of The Void would result in his rebirth instead of permanent death. Engineered his own death at the hand of The Void and before said death left behind a collection of complex clues in the form of riddle for his reincarnated younger self to bring himself to a hidden chamber unknown to Thor, Heimdall or even Odin. Has planned and made deal with Mephito so that during Odin's vulnerable state of the Odinsleep he tricked Thor into killing him, so that his soul would possess the Allfather the moment Thor killed him. Went through a complex paradox involving time travel so that Thor would kill his own grandfather Bor, resulting in his exile. In combat, Loki is equipped with millennia of experience battling many different kinds of foes across the universe, and extremely skilled in weapon wielding and magic)

Weaknesses: Loki's passionate hatred of Thor, lust for power, and his tendency to alienate himself through his ignoble actions greatly impedes his ability to bring his well laid plans to fruition. It is possible he needs to cast a spell before receiving damage to regenerate from it, as when Thor broke Loki's arm by surprise, he considered the broken arm could only heal naturally and not by magical aids, despite Loki reattaching his head sliced off by Balder in the same storyline.

Note 1: This profile only covers the original Loki that debuted in Journey into Mystery #85 and met his demise in Siege. Other incarnations such as Kid Loki and Ikol will have their own profiles later.