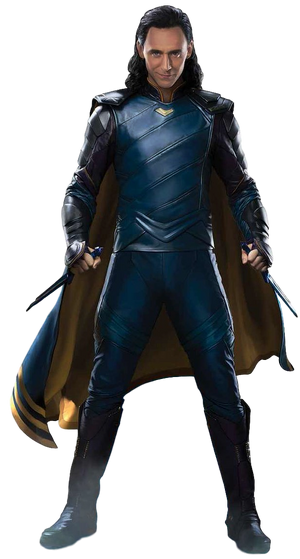 Loki Laufeyson is the son of Laufey, the ruler of the Frost Giants of Jotunheim, but shortly after his birth, he was abandoned and left to die. Found by the Asgardian king Odin, Loki was raised in Asgard and his wife Frigga as an Asgardian prince alongside their biological son Thor. When he grew up, he became known as the "God of Mischief".

Powers and Abilities: Superhuman Physical Characteristics, Self-Sustenance (Type 1), Social Influencing, Illusion Creation, Longevity, Ice Manipulation, Mind Manipulation, Mind Control, Memory Manipulation, Teleportation, Telekinesis, Invisibility and Perception Manipulation (Can make himself "invisible" by tricking others' minds. Can conceal his presence from the likes of Heimdall. Can choose certain individuals in a group to sense him [Appeared before Thor but not on SHIELD security cameras, and let Selvig listen to his persuasion while blocking Fury's ability to do so]), Duplication, Shapeshifting (Transformed into a snake), Transmutation (Probably turned Thor into a frog), Expert in Close Combat, Armor Generation, Cloth Manipulation (Can change his clothes into his regular outfit), Regeneration (Low-Mid; got back up after being smashed multiple times by Hulk. Survived being stabbed through the torso ), Limited Matter Manipulation/Summoning (Summoned the Casket of Ancient Winters to attack Heimdall and made it disappear with a wave of his hand after using it. Made the Tesseract materialize in his hand), Creation (Can conjure daggers), Memory Manipulation (Presumably made Odin forget his powers. Made Valkyrie relive painful memories), Resistance to Cold, possibly Astral Projection, Energy Manipulation and Levitating (Possesses these powers according to WoG, though he never showed them on screen)

Attack Potency: At least Multi-City Block level, likely higher (Stronger than Prime Form Ultron. Can trade blows with comparable foes. He should have similar strength and durability. Managed to match a weakened Thor who was still strong enough to overpower a 475% charged Iron Man, although it should be noted that Thor was likely holding back. Also fought with Valkyrie, who can harm him. Killed a Dark Elf soldier by snapping his neck). Far higher with weaponry (Is able to harm Kurse and Thor with sharpened weapons. Even regular Asgardian weaponry could harm much powerful beings such as Hela. Believed he could slice the throat of Thanos with a knife, though it is unknown if he could actually do so) | Large Town level (Briefly incapacitated Thor with a stab and an energy blast) | Large Town level (Powered by the Mind Stone, the same stone that powered Vision. Fought with Thor)

Lifting Strength: At least Class 100 (Most likely stronger than Captain America. Snapped the neck of a Dark Elf soldier)

Durability: At least Multi-City Block level, likely higher (Superior to regular Asgardians. Is bulletproof. Was unharmed after being at the epicenter of the Bifrost explosion. Survived a repulsor blast by Iron Man. Completely unharmed by Captain America's shield. Withstood a reflected blast from the Scepter straight at his chest. Withstood a lightning blast from Thor. Withstood a strike from Mjolnir.  Survived, albeit barely, a thrashing by the Hulk. Fell for 30 minutes, which is equivalent to falling from a height of 90 kilometers )

Stamina: High (Held out long enough after being impaled in order to fake his death in front of Thor.)

Intelligence: High. He is very manipulative and clever. Manipulated entire Avengers and Asgard. Has high knowledge about arcane lore.

Weaknesses: Mentally unstable and incredibly arrogant. Initially fueled by his jealousy for Thor. Later becomes highly protective of him and is willing to sacrifice himself to protect Thor and his allies.

Frost Giant Physiology: Since Loki had been enchanted to look like an Asgardian, Loki's Frost Giant features only come out when he was in contact with Frost Giant magic, such as when he utilizes the Casket of Ancient Winters or when he was inflicted with the Frost Giants' touch.

Sorcery: Loki learned how to wield magic while growing up in Asgard, thanks to his adoptive mother Frigga. He eventually became a highly skilled and formidable sorcerer, with it being his main asset in battle.

Trickery: As the God of Lies and Deceit, Loki is able to trick and manipulate his enemies into doing what he wants. However, he was tricked and outsmarted by Black Widow.

Arcane Lore: Loki possesses great skill in wielding mystical artifacts and arcane lore, notably Gungnir, the Casket of Ancient Winters, and the Tesseract. Loki uses his knowledge primarily to conjure illusions and manipulate others to do his will. He has demonstrated the ability to cause the Casket of Ancient Winters to seemingly disappear into thin air, although it is not immediately clear if this was entirely Loki's doing or, in some way, bound to an inherent property of the item. He also claims to know of secret pathways between worlds that even Heimdall himself is unaware of, which allow Loki to travel without using more common transportation methods (such as the Bifrost). As ruler of Asgard, he also gained control of the Destroyer for a time.