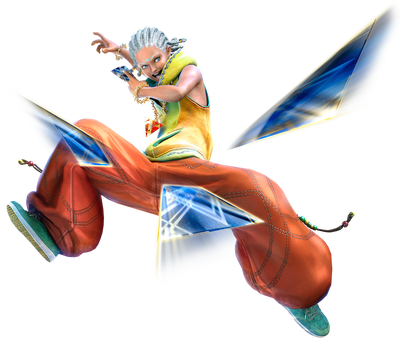 After the First Armageddon, the God of Chaos Aesir decided to enlighten humans to the true nature of their world and split his divine power between humanity's virtues of light and dark to create the Eyes of the World. In doing so, Aesir also split his very soul into two beings, Loki and Loptr. In order to protect the balance that his split had given the world, Loki was tasked with the Sovereign power, the power to control the Eyes themselves whereas Loptr was given the Prophetic power, being able to use his powers of the Remembrance of Time in order to keep track of the world's progression.

Loki and Loptr were also composed of good and evil virtues, with Loki being the 'better' half and the one who decided to enlighten humans when he was Aesir. During the Witch Hunts 500 years ago, Loptr as the evil half of Aesir, decided to take back the Eyes of the World for his own use. He killed Rosa and would later use this event to spur Balder into believing that Loki was the true culprit because of their similar appearances. Loki, realizing that Loptr wanted him out of the way because of his ability to control the Eyes, escaped to the future but lost his memory in doing so. The only thing he remembers is his name and the urge to reach Fimbulventr.

Name: Loki, The Sovereign One

Classification: Good Half of Aesir

Attack Potency: At least Multi-Continent level (Can open the Gates of Hell through sheer force, Overpowered an Insidious, Should be equally as powerful as Young Loptr), His Trump Card ignores conventional durability

Lifting Strength: Class P (Equal to Loptr, who was able to throw a meteor)