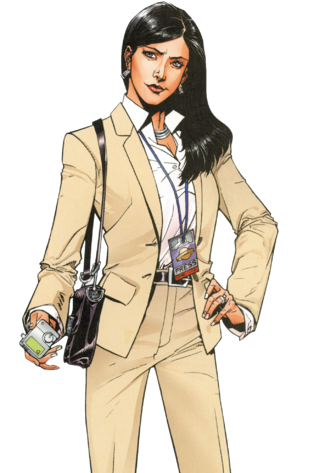 Lois Lane is a Pulitzer Prize winning journalist for the Daily Planet and Superman's long-time love interest. Although her intrepid reporting has often placed her in the role of the damsel in distress, she has nevertheless persevered in her pursuit of hard, honest journalism, often getting herself out of sticky situations when Superman is unable to. As of the Rebirth continuity, she is married to Superman and helps care for their Half-Kryptonian son, Jonathan.

Tier: 10-A, 9-C with firearms, possibly higher with the Hellbat Gauntlet

Classification: Reporter for the Daily Planet, Wife of Superman

Attack Potency: Athlete level (Can easily hold her own against low-level armed crooks and trained soldiers), Street level with firearms (Carries a loaded pistol in case of emergencies), possibly higher with the Hellbat Gauntlet (A piece of the suit Batman used to raid Apokolips and fight Darkseid, blasted back an alien tough enough to withstand blows from Superman)

Speed: Athletic Human (Can take trained soldiers by surprise before they can react)

Durability: Athlete level (Has fought against trained soldiers on more than one occasion)

Stamina: Average, Lois is a fit and active reporter hailing from a military background, but is not superhuman by any means.

Intelligence: Gifted. As an award-winning reporter, Lois has gotten herself into and out of many dangerous situations on her own, once seducing a drug lord who captured her before stealing a submachine gun to force her way out when Superman was unable to come to her rescue. Due to her father's military background, she is a black belt in at least one martial art and easily takes out most normal thugs on her own while working undercover and is well-trained in the use of firearms. In addition, she's a skilled makeup and disguise artist, completely changing her appearance on more than one occasion.