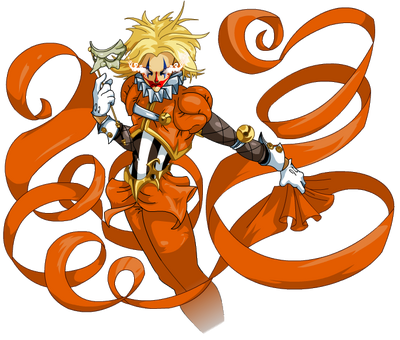 Loco is a Lesser Power and the Demigod of mischief and fortune that is responsible for nearly starting a God war as a result of pulling a prank on Baldric approximately 5000 years ago. This led to Loco being sealed for eternity by the Elemental Lords. Every April 1st however, the power of the Lords' sealing grows weak, while Loco's power gradually increases to the point where he is able to be summoned, traditionally by Radagast and Khold Staeirgh, and thus uses this opportunity to perform a worldwide prank on Lore every year.

Attack Potency: Planet level (Can perform a spell that would cause the moon to crash onto Lore and effectively destroy the planet), higher while unrestricted (If Loco's powers were to act out of control, it will run amok throughout the world until there is nothing left and when there is nothing left, it will search for another world and do the same)

Range: Planetary (Can cast spells that affect the Moon from the surface of the Earth), potentially Low Multiversal while unrestricted (Implied to be able to traverse the boundaries between universes)

Intelligence: Average. Very gullible and absent-minded due to confidence in his status and abilities.

Weaknesses: Prefers not to act serious, instead typically enjoys playing around with his opponents. Can be summoned without his powers and immortality although only when he is in his sealed condition. The result of this will also cause his powers to act on their own.

Retrieved from "https://vsbattles.fandom.com/wiki/Loco?oldid=5905288"
Community content is available under CC-BY-SA unless otherwise noted.