The Living Dead series is a series of six zombie horror films created by George A. Romero beginning with the 1968 film "Night of the Living Dead" directed by Romero and co-written with John A. Russo. The franchise predominantly centers on different groups of people attempting to survive during the outbreak and evolution of a zombie apocalypse. The latest installment of the series, Survival of the Dead, was released in 2009, with Rise of the Living Dead, a prequel film written and directed by Cameron Romero (son of George) in the works. A sixth sequel taking place after Land of the Dead, titled Road of the Dead, is also in development.

After Night of the Living Dead's initial success, the two creators split in disagreement regarding where the series should head, and since the film was in the public domain, each was able to do what they liked with the continuity of their projects. Romero went on to direct five additional Dead films, while Russo branched into literary territory, writing Return of the Living Dead, which was later loosely adapted into a film of the same name and would have its own franchise.

Note: Within versus threads, the original poster should specify which incarnation of the Zombies that is being used.

Main Movies of the Series

Human characters such as Riley Denbo range from athlete physically to Building level (While equipped with Dead Reckoning).

The speed of the verse is around athletic human level for human characters with supersonic attack speed with weapons.

The Zombies varies in types (their speed, intelligence and threat depends on the type), while some zombies can be took down by regular humans, the most evolved ones are extremely dangerous and hard to kill or contain by normal means:

The zombies in this movie differ from those in Night of the Living Dead. Return's interpretation of zombies has influenced the versions used in other culture, particularly regarding their hunger for brains and their constant vocalization of this hunger.

All zombies in this movie were created due to exposure to the 2-4-5 Trioxin chemical in either gas or liquid form. The bite of a zombie does not spread the contagion unlike most of the other movies in the series. 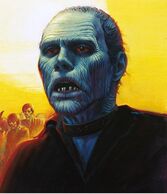 Zombie (George A. Romero)
Add a photo to this gallery

Return of the living Dead 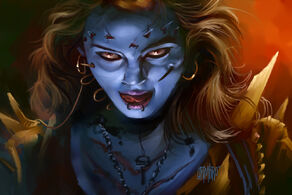