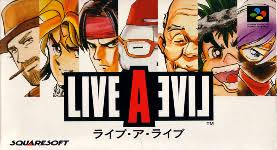 Live a Live is a JRPG game released for the Super Famicom in Japan, 1994, by Squaresoft. Unlike other typical JRPGs of its time, Live a Live consisted of seven chapters, each with their own lead protagonist and unique setting, that the player could choose in any order. Each of these seven scenarios had their own gameplay style that generally differed from regular RPGs, with each of their stories being connected together in the final chapter. There is no one main protagonist, with each scenario's protagonist having equal importance to how the final chapter plays out. There is, however, one central antagonist who is present in each of the seven scenarios that the heroes must defeat to restore peace in their own timelines.

Generally, Live a Live is not a powerful verse, with the majority of its characters sitting in Tier 9 or the lower half of Tier 8. The top tiers of the verse, that being all main characters in the Final Chapter, breach tier 7 and currently sit at Town level. There is, however, a god tier of the verse; Odio, the Demon King. Although he is also 7-C physically, he is able to use Armageddon, which can destroy multiple time-space continuums and is therefore Low Multiverse level with this attack.

In terms of haxed abilities, the verse has a decent array of hax, ranging from Mind Manipulation, Telepathy, Sleep Manipulation, Petrification and forms of Durability Negation.