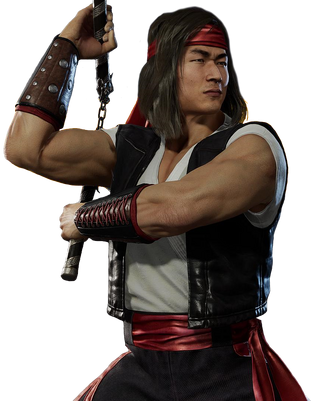 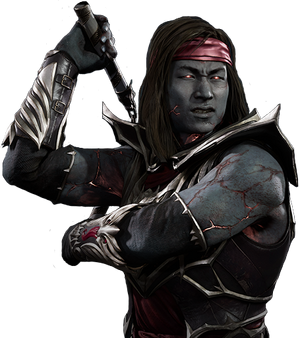 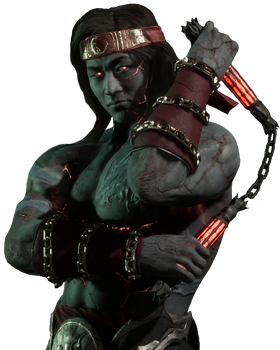 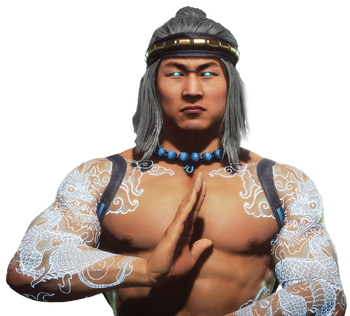 Liu Kang is one of the main protagonists of the Mortal Kombat series and one of the best warriors of Earthrealm. Liu Kang was raised by Shaolin monks, who taught him the way of the spiritual warrior and was trained by Bo' Rai Cho under Raiden guise for the task of freeing Earthrealm from Outworld clutches. After his training Liu Kang proved his valor in the Mortal Kombat Tournaments by defeating Outworld strongest foes and becoming a living legend, however, in a tragic turn of events, he ends up being killed and revived as an undead in both timelines. He makes his return as the series' main protagonist for the first time in decades during the events of Mortal Kombat 11, becoming a god as a result of Raiden's sacrifice to break the vicious cycle of fate.

Shaolin monk and Champion of Earthrealm. Liu Kang was an orphan adopted and trained in the arts of kombat by the Shaolin order. He honored them by defeating Shang Tsung in Mortal Kombat and saving Earthrealm as "the Chosen One," a title that weighs heavy on his shoulders.

Age: Apparently in his 20s (at the time of his death in MK9), though possibly 30s by Deadly Alliance (in which he died), likely in his 50s in MKX

Superhuman Physical Characteristics (Possesses superhuman strength allowing him to break walls of stone, send people flying, throw people over far distances and knock heads off), Martial Arts (Karate, Jeet Kune Do, Pao Chui, Dragon Kung Fu, Shaolin Kung Fu. Gains Raiden's fighting styles as the God of Flame), Weapon Mastery (Uses nunchakus, whips and swords), Acrobatics (Exercises enhanced condition, self-momentum and mid-air jumps. Casually does far distance jumps, can jump twice while airborne, halt his descent by rolling, decelerate after moving quick and easily do back flips), Immortality (Types 1. Liu Kang, as the winner of the Mortal Kombat tournament, is granted stunted aging until the next one), Pressure Points (Able to perform a One Inch Death Strike), Fire Manipulation (Can generate dragon fire for various kombat purpose, like infusing fires to his attacks, shooting fire bullets, teleportation and surrounding himself in it), Stealth Mastery ( Infiltrated the Kove alongside Raiden and Kung Lao. While disguised, infiltrated a Tarkatan reservation), Flight (Restricted flight), Transformation & Summoning (Can become a dragon that spits fire or summon a flaming dragon), Likely Chi Manipulation (Appears to be stealing chi here), Attack Reflection (Can reflect projectiles as a fire ball), Light Manipulation (Can fire light bursts), Healing (Can heal injuries by focusing light energy to himself), Darkness Manipulation (Can fire bursts of darkness based on the element of Yin), Explosion Manipulation (Can make explosive orbs of darkness), Limited Resistance to Poison Manipulation (Can survive a dosage of poison gas even without receiving treatment afterwards, but can be killed if he is exposed to gas long enough), Can interact with his past self, but will share with it irreparable damage and death (As shown throughout MK11). As a spirit, he can possess others allowing him to control their body movements

All previous abilities, Immortality (Types 1, 2, 3 and 7. Liu Kang is a reanimated corpse capable of regeneration and insane resilience to lethal injuries), Regeneration (Low-Mid, healed his snapped neck), Age Manipulation (His Houan chains can age others to death), Self-Sustenance (Type 2), Immunity to Soul Manipulation (Lacks his own soul)

All previous abilities from the Human key, Magic (Has mastered Shinnok's dark sorcery), Immortality (Types 1 and 7), Soul Manipulation (Able to consume souls, which amplifies his powers and allows him to convert soul's life force into tangible, flaming skulls), Self-Sustenance (Type 2), Immunity to Soul Manipulation (Lacks his own soul)

All previous abilities enhanced, possesses Raiden's powers such as Electricity Manipulation (Can manipulate a true lightning, such as arc lightning, lightning bolts, infuse attacks with lightning), Weather Manipulation ( Created a fiery thunderstorm), Flight (True flight), Transmutation (Turned Kronika into glass with his flames), Spaceflight (Can fly even in outer space), When using the Hourglass he uses: Limited Sand Manipulation and Energy Manipulation (Can create the Sands of Time which uses raw temporal energy ), Likely Regeneration with the Jinsei (Low-Mid. Earthrealm's Jinsei flows inside of him and it was able to recover Fujin from a lethal wound), Self-Sustenance (Type 1 and 2), Resistance to Ice Manipulation (Can endure the frigid temperatures of outer space, which is -454.81°F) Time Manipulation ("Raiden's Gift" protects him from the Hourglass' temporal powers)

Attack Potency: Large Building level (Defeated Ermac, Elder Shang Tsung, Scorpion, Quan Chi and Goro back to back) | City level (Almost killed Shao Kahn with his Fist of Flame fatality) | City level (He is destined to fight and die to Raiden, no matter the timeline) | At least City level (Was the only Revenant that injured Raiden. Absorbed his human counterpart's soul and had his power multiplied by it) | At least City level, likely higher (Has the combined might of himself and Raiden) | Small Country level, likely Large Planet level (Used the Jinsei that was flowing inside him to "fuel his fire" and after that, utterly destroyed the White Revenants and matched Corrupted Cetrion step for step before ultimately killing Kronika)

Intelligence: Gifted, is one of Earthrealm's greatest warrior and was able to defeat many powerful foes in combat. Orphaned as a child, and was raised to learn martial arts by the White Lotus Society. His aptitude for martial arts gained the attention of the thunder god Raiden and the god took him to Bo' Rai Cho to further increase his skill.

MK9 Liu Kang.
Add a photo to this gallery

Fighting Spirit.
Add a photo to this gallery