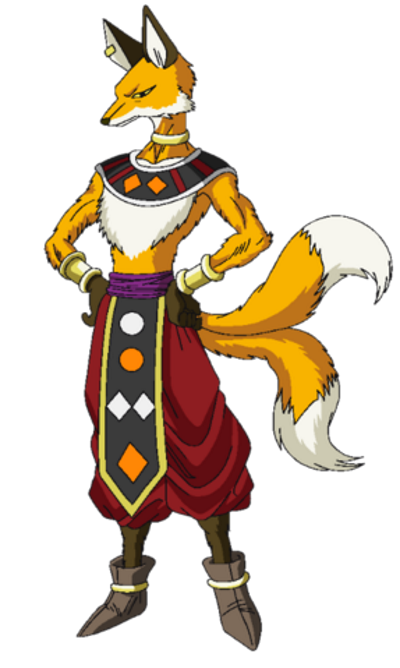 Liquir is the God of Destruction of Universe 8. His Angelic Attendant is Korn. He has the appearance of a 3 tailed fox/kitsune. Personality-wise Liquir seems to be quite prideful in the fact that his universe has one of the highest mortal levels and as such is exempt from the Tournament of Power. He also seems to be keen on impressing the Omni-King.

Attack Potency: Universe level+ (A fight between two Gods of Destruction can result in the destruction of two universes. Should be comparable or superior to Toppo, who was capable of warping the infinite World of Void, and is himself comparable a limit-broken Vegeta, who was capable of fighting competently with a held-back Jiren, stated several times to be the strongest foe in Dragon Ball history and surpassing the likes of even an incomplete Infinite Zamasu), can negate conventional durability by destroying one's soul and erasing them from existence.

Speed: Massively FTL+ via powerscaling (As a God of Destruction, Liquir should be comparable to Beerus and Champa)

Intelligence: Has years of fighting experience and training with Korn. He also has the 4th highest mortal level and thus is very talented and competent at his job as a God of Destruction.

Weaknesses: If the Kaioshin of his respective universe is killed, so is the god of destruction.