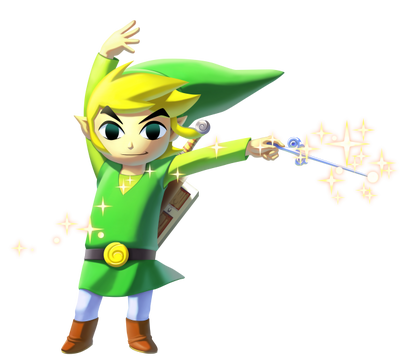 This Link lives on Outset Island on the Great Sea, the region above Hyrule after it was flooded by the gods to prevent Ganondorf from conquering it. Link is celebrating his birthday, and it is customary on the island for one to receive the Hero's Clothes to honor the legendary Hero of Time when they reach the age the Hero was during his quest. Since the Hero of Time was about sixteen years old when he defeated Ganondorf, it is possible that Link is also this age, but based on his physical appearance and voice, however, it seems more likely that this custom refers to when the Hero of Time started his quest, at the age of about nine. Shortly after this, the Helmaroc King captures Link's sister, Aryll, prompting Link to travel with Tetra and her pirates to the Forsaken Fortress. Link initially fails to rescue Aryll, but is rescued by the King of Red Lions, who helps him in his quest to save his sister. Link is eventually successful, and is also able to defeat Ganondorf after retrieving the Master Sword and restoring its power. With this quest complete, Link, Tetra, and her pirate crew set sail in search of a new land.

Although the game inspires speculation about Link's possible relation to the Hero of Time (namely, his family shield which was rumored to be used by the Hero himself'), this theory is discouraged by the King of Red Lions, who is in fact the King of Hyrule, when he tells the sea spirit Jabun that "[Link] appears to have no connection to the legendary one." The fact that he managed to pull the Master Sword out of its pedestal (which was said to only be capable to someone related to the Knights of Hyrule) does hint something, however. After Link overcomes many hardships, the King of Red Lions names him the Hero of Winds, and Ganondorf declares Link to be the Hero of Time reborn.

This Link is the same Link from The Wind Waker. After the ending of The Wind Waker, Link and Tetra set off to find the land that would be the next Hyrule after the former kingdom was destroyed. After Tetra is captured by the Ghost Ship, Link makes a bold effort to save her, but is knocked out. When he wakes up, he meets a Fairy named Ciela, who becomes his companion for the rest of the game. He also meets Linebeck, who helps him by letting him use his ship. Link acquires a new sword, Oshus's Sword, which Oshus lets him have.

Link finds three spirits which allow him to find the Ghost Ship, where Tetra is being held. He saves her, but finds she's made of stone, due to her life force being drained. To undo this, Link must defeat Bellum, an evil being inhabiting the Temple of the Ocean King. To defeat it, Link needs the Phantom Sword, a weapon made of the three Pure Metals. After Link finds these metals, Zauz forges the Phantom Sword's blade, and Oshus creates the handle out of the Phantom Hourglass. With the Phantom Sword in hand, Link defeats Bellum and restores peace. It's revealed that the world Link explored was an alternate dimension, and Link and Tetra are sent back to their own realm. During the adventure, only ten minutes passed in Link and Tetra's world, and it at first seems as if the experience was a dream. However, Link finds an empty hourglass in his pocket, and sees Linebeck sailing away in the distance.

Name: Link, also known as the Hero of Winds and Hero of the Oceans

Age: 12 (though this seems to be inconsistent with the age of child Link in Ocarina of Time), likely 13 in Phantom Hourglass

Powers and Abilities: Superhuman Physical Characteristics, Enhanced Senses, Holds the Triforce of Courage (Grants protection against evil magic), Is a Master swordsman and expert marksman, Magic (Can imbue his arrows with fire, ice, and light to increase their efficiency in combat, his Ice arrows are capable of instantly freezing lava, and his Fire arrows can partially melt a hill made of ice, Light arrows deal increased damage against evil monsters), Can control the flow of the winds with his Wind Waker, Teleportation via cyclones, Limited Flight with the Deku Leaf, Resistance to Time Stop (Can move in stopped time), Magic Nullification with the Master Sword, The Triforce and Master Sword give him Resistance to Soul Manipulation, Can see and attack ghosts, Mind Control (Via Command Melody), Time Manipulation (By advancing from day to night or vice versa) | Superhuman Physical Characteristics, Weapon Mastery, Statistics Amplification (Via Ciela), Fire Manipulation (Via Leaf), Energy Projection (Via Neri), Time Stop (Via Phantom sphere), Resistance to Absorption (Via Phantom Sword)

Attack Potency: At least Large Planet level, likely Large Star level (Should be able to likely harm Ganondorf with the Triforce of Power) | Multi-Continent level (Even without the Triforce of Courage and the Master Sword, he managed to defeat Bellum)

Lifting Strength: Class T (With the Power Bracelet, he can lift and throw large stone statues hard enough to pulverize them) | Class 100

Standard Equipment: A sacred sword (whether it be the Master Sword in WW, or the Phantom Sword in his later adventure), Mirror Shield, a sail, a bow and arrow, a boomerang, bombs, bombchus, grappling hook, hookshot, Deku Leaf, Wind Waker (a baton that controls the flow of the winds), a Gossip Stone (these allow for long distance communication between two people)

Intelligence: Very clever, Link is able instantly learn how to use new items and can solve complicated puzzles on the spot, a competent sailor, and is stealthy enough to sneak into the deepest parts of Forsaken Fortress without being caught. On top of that, Link is a master swordsman (evident of his mastery of the Hurricane Spin Attack, which is the highest level sword technique there is), and archer, and has as much experience as Ocarina of Time Link when it comes to fighting strange enemies and solving complicated dungeons, having two adventures under his belt as well

Weaknesses: Some of his equipment have a limited amount of ammo | He can only equip one fairy at a time, the Phantom sphere requires a cooldown after it's been used