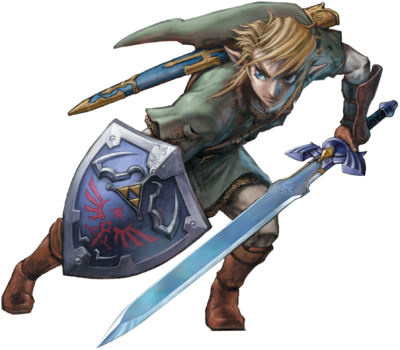 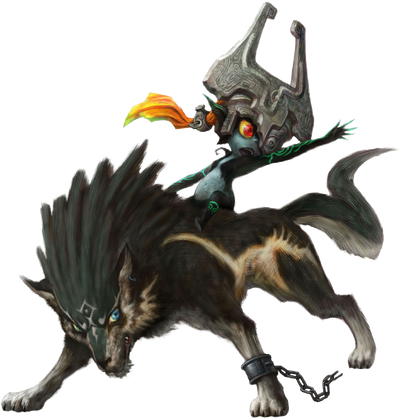 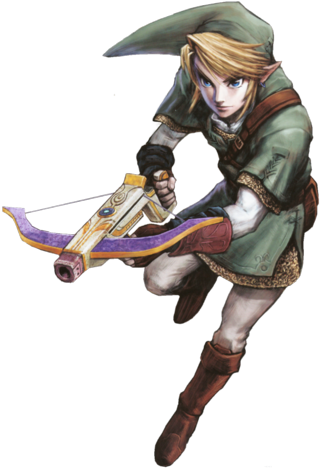 Link is a rancher in Ordon Village who is around 16 years old. He has a Triforce shaped birthmark on his hand, strongly implying that he currently possesses the Triforce of Courage, though possibly it is merely there as a mark of a Chosen Hero. One day, Rusl, the town's only warrior and swordsmith, requests Link to be his proxy for a trip to Hyrule to deliver the Ordon Sword and Ordon Shield which the Royal Family ordered. As he prepares to leave, King Bulblin and his forces attack, knocking out Link and kidnapping his friends Ilia and Colin, along with the other children. After regaining consciousness, Link is drawn into the Faron Province, which has become blanketed with Twilight. The Twilight morphs Link into a wolf. He is imprisoned by Shadow Beasts, but escapes with the help of Midna.

Later, Link delivers Light back to the Faron Province, with the help of Midna, and awakens as the Chosen Hero, now donning Link's trademark green clothing. Link and Midna venture to collect the Fused Shadows, which can be used to defeat Zant, the king of the Twilight Realm, who covered Hyrule in Twilight, and also defeated the true power behind Zant: Ganondorf, shortly thereafter. Afterward, he and Zelda witnessed Midna's departure to the Twilight Realm, as well as her destruction of the Twilit Mirror in order to ensure the tragedy never repeated itself. It is said in the Twilight Princess manual that this Link later becomes chief of Ordon village, but this was never seen in the game itself. This Link is often referred to by fans as the "Hero of Light" because of his acts to restore the Light to Hyrule; however, there are those who refer to him instead as the "Hero of Twilight". Both are fan-made titles that do not appear in any official material, although his true title in this game is "Hero Chosen by the Gods".

Throughout his adventure, he was trained by the Hero's Shade in the combat styles of the hero and eased his regrets, thus allowing him to move on.

Superhuman Physical Characteristics, Resistance to high temperatures, Underwater Breathing (Type 3 via the Zora Armor), Magic Nullification, Master Swordsman and Archer (Learned his skills from a past version of Link), Holds a third of the Triforce, Which gives him Resistance to Magic, and Mind Control, Also allows Link to use Magic, Air Manipulation (With the Gale Boomerang), Explosion Manipulation (With Bombs), Attack Reflection (With Shield Bash), Healing (With bottles), Resurrection (With Fairies), Statistics Amplification (With the Great Fairy's tears and the rare Chu Jelly), Animal Manipulation (Link can freely communicate and interact with animals, being able to use them for tasks and call them with certain plants)

All abilities to a greater extent. Also includes limited Life Manipulation (The Dominion Rod can turn certain statues alive), Transformation (Can now transform into Wolf Link at will), Resistance to Sealing, Soul Manipulation, and Power Absorption (Can hold the Master Sword without these effects)

All abilities to a far greater extent, also includes Light Manipulation (Was able to clear the darkness of the Twilight Realm)

Enhanced Senses, Extrasensory Perception (Can perceive scents of others and who the scents belong to), Soul Manipulation (Can rip out the souls of Poes) , Non-Physical Interaction (Can see and harm ghosts), Animal Manipulation greatly enhanced (Can now directly communicate with animals)

Attack Potency: At least Large Mountain level (His bombs can destroy whole mountains) | At least Multi-Continent level (Wields the Master Sword) | At least Large Planet level, likely Large Star level (Should be superior to Calamity Ganon. Can contend with Ganondorf. Superior to Zant, who could warp the twilight realm which contains a sun)

Speed: At least Massively Hypersonic+ with Relativistic+ reactions and combat speed (Reacted to and dodged Beamos beams and swing his sword at comparable speeds. Can keep up with Ganondorf and parry his sword strikes)

Lifting Strength: Class T (Should be no weaker than his Wind Waker counterpart with the Power Bracelet)

Durability: At least Large Mountain Level (Can survive his bombs exploding in his face) | At least Multi-Continent level (Wields the Master Sword and is unharmed by it's effects) | At least Large Planet level, likely Large Star level (Can withstand blows from the likes of Zant and Ganondorf)

Range: Extended melee range with melee weapons, up to thousands of kilometers with ranged weapons

Standard Equipment: Master Sword, Hylian Shield, a slingshot, a heavy ball and chain, bombs, water bombs, bomblings, a bow and arrow (can combine bombs with arrows), a crossbow, a boomerang infused with the power of wind, double clawshots, Horse Call, Dominion Rod (the ability to control certain statues), Spinner, Hawkeye (a mask that acts like binoculars, and when combined with the longbow makes it a long-range sniping bow), several armors which grant special abilities including Zora like qualities (the ability to breathe underwater), and invincibility towards conventional weapons

Intelligence: Very clever, is able instantly learn how to use new items and can solve complicated puzzles on the spot, mastered all the Hero skills and is a master swordsman, also adapted on the spot to his wolf body. Can adapt on spot to any new environment and fight normally. Capable of discovering patterns, weak points, techniques, and ways on how to defeat giant town level monsters on the first encounter

Weaknesses: Using the Zora Armor makes him weak to fire and ice based attacks

Thanos (Marvel Cinematic Universe) Thanos' Profile (Both were at their strongest, and speed was equalized)