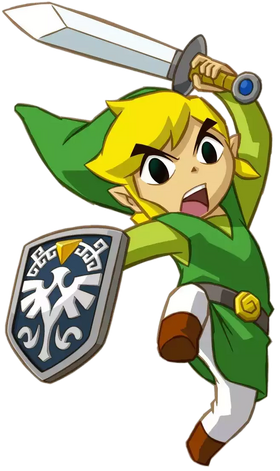 As written in the Hyrule Historia, the Link in Spirit Tracks is chronologically the second Link in the Adult Timeline.

Link is originally an apprentice engineer, who becomes a hero by saving the land of New Hyrule from the evil of Malladus. Throughout his adventure, he works together with the spirit of Princess Zelda, who inhabits a Phantom form in certain situations. His appearance is similar to that of the Link from Phantom Hourglass, however, his voice is now similar to that of the younger Link from Ocarina of Time.

Age: Appears to be about 12

Attack Potency: Multi-Continent level with Lokomo Sword and Bow of Light (Was capable of defeating Malladus)

Durability: Multi-Continent level (Survived Malladus' powers exploding out of control and the destruction of the Demon Train)

Range: Extended melee range with sword. Varies from tens of meters to tens of kilometers with ranged weaponry.

Intelligence: Should be no less capable than any of the other Links. Despite being an apprentice engineer at first, Link's combat prowess rose incredibly quickly, and was in the end able to defeat Malladus with some additional help from Zelda.