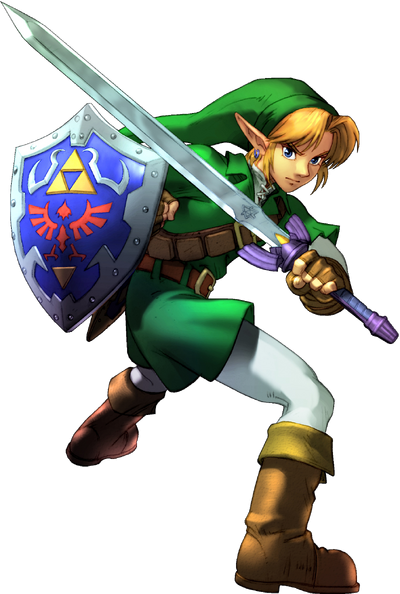 Link is a character from The Legend of Zelda series that appears in Soul Calibur ll. Unlike other Links, this Link is unique to Soul Calibur and is a fusion of multiple incarnations.

Hyrule's tranquility was shattered by the arrival of several disasters, which brought opaque, ominous clouds with them. Eventually, it was discovered that a wizard was to blame for all that had happened. Just as the people were about to lose all hope, the sun miraculously returned as Link, having been summoned by Princess Zelda to find the disasters' source, successfully defeated the wizard. The people of Hyrule rejoiced in the belief that eternal peace would rule; but it eventually became clear that the wizard who was responsible for the disasters was in fact controlled by an evil sword from another world, Soul Edge, and that the fragments of Soul Edge had been gathering in the other world. Knowing that the resurrection of the evil blade must be prevented at all costs, Link chose to travel to the other world and destroy Soul Edge himself. He gathered his trusted Master Sword and Ocarina and transported himself off on a secret journey.

Attack Potency: At most City level (Can fight and defeat Raphael Sorel)

Speed: Superhuman with Supersonic+ reactions (Comparable to other characters. Can dodge Raphael's attacks)

Intelligence: Link is a notably very skilled fighter who in characters makes use of all the tools at his disposal to achieve victory