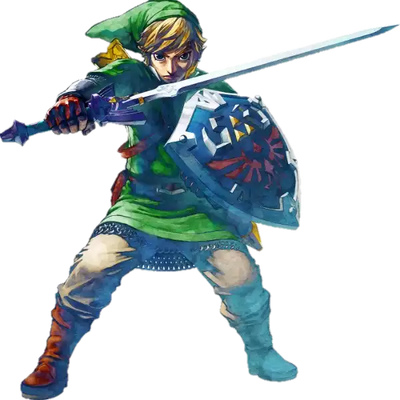 Link is the hero chosen by the goddess Hylia to perform a great task. A resident of Skyloft, he attends the Knight Academy, a boarding school for those wanting to become Knights of Skyloft. Like all denizens of The Sky, he owns his own Loftwing; in particular, he owns a rare Crimson Loftwing. At the beginning of the game, Link wears clothes similar to those worn by other residents of Skyloft. This incarnation of Link is the earliest known appearance of the character in the timeline, and due to the gameplay, which is designed for right-handed use, this Link seems to be right-handed as well. It is possible though, that the game was mirror imaged and thus this Link is also left-handed as well.

Link is close friends with Zelda, daughter of the academy Headmaster, Gaepora. A rival of Zelda's affections is Groose, who attempts to sabotage his chances of entering and completing the Wing Ceremony at the beginning of the game by kidnapping his Loftwing. He eventually regains his mount and recovers the Bird Statuette, earning him a moment alone with Zelda. After he receives her Sailcloth, the two embark on a flight together; however, they are attacked by a fell black tornado, and Zelda is taken away to a land below the clouds.

Link is thrown from his Loftwing, and a mysterious blue figure appears in his dreams. When he awakens, he finds Gaepora standing before him, wanting to know what happened to Zelda. After Gaepora leaves, he hears a voice outside his door. Seeing the mysterious figure in the hallway, Link follows her to the Statue of the Goddess, where she opens the door to a chamber found inside the statue. Here, he finds the Goddess Sword, and the figure reveals herself to be Fi, the spirit inhabiting the sword. Using the sword to open a path through the Cloud Barrier, Link begins his search for Zelda on The Surface.

Several times throughout his quest, he is confronted by Ghirahim, Demon Lord of the creatures inhabiting The Surface. Link eventually finds out that Zelda is on a journey of her own to purify her spirit, protected by the Sheikah Impa. Eventually, Zelda and Impa seek refuge within a Gate of Time to elude Ghirahim's grasp. An Old Woman reveals to Link that a second Gate of Time exists; however, to activate it, he must infuse the Goddess Sword with three Sacred Flames. For each Sacred Flame he gathers, the sword transforms, until it becomes the Master Sword.

With the Master Sword in hand, he activates the Gate of Time, where he is reunited with Zelda. She explains to him that she is a physical reincarnation of the goddess Hylia; she assumed a human form in order to combat Demise, the ancient Demon King whose beast-like form Link sealed away earlier with the help of a reformed Groose. The only way they can defeat the eternal Demise is to collect the Triforce and wish for his destruction. Link eventually recovers the Triforce, preventing Demise from re-emerging. However, Zelda is taken away by Ghirahim into the past, for there his master still exists.

Ghirahim is able to use her body to resurrect Demise; though Demise is ultimately defeated, the Demon King promises to return to plague their descendants in another form. Zelda, Link and Groose return to their own time, where the Old Woman is revealed to have been Impa all along. Groose returns to the sky, whereas Zelda decides to remain on the surface. She then asked what Link intended to do, with Link sweetly smiling at her as the scene moved towards Link and Zelda's Loftwings flying back into the sky, implying that Link chose to stay with Zelda.

Name: Link, The Hero of the Skies

Powers and Abilities: Superhuman Physical Characteristics, Enhanced Senses, Magic, Master swordsman, Expert marksman, Holds all three pieces of the Triforce, including the Triforce of Power (Increases physical strength and grants immortality), Triforce of Courage (Grants protection against evil magic), and the Triforce of Wisdom (Grants increased magical prowess, the ability to heal others, and the ability to speak with others telepathically), Energy blasts in the form of the Skyward Strike, Resistance to Time Manipulation (Can stay around Timeshift Stones turned on and off with no ill effects), Magic (with the Master Sword) and intense heat (Due to the Fireshield Earrings)

Attack Potency: Universe level, likely Universe level+ (Was able to best Demise in close combat, also has the Complete Triforce in his possession)

Speed: At least Sub-Relativistic+ with Massively FTL reactions/combat speed (Fought and killed Demise, who is immensely superior to Ganondorf)

Lifting Strength: At least Class E (Possesses the complete Triforce and is physically comparable to Demise)

Striking Strength: Universal, likely Universal+ (Has the Complete Triforce by the end of the game)

Range: Extended melee range. Varies from Tens of meters up to Thousands of kilometers with ranged weapons. Cross-universal via reality warping with the Triforce

Intelligence: Quite high, since he figures out all the puzzles in dungeons, has completely mastered the use of dozens of weapons

Note: There is no single Link, but a good number of them as the Legend of Zelda games take place throughout the history of the LoZ world.