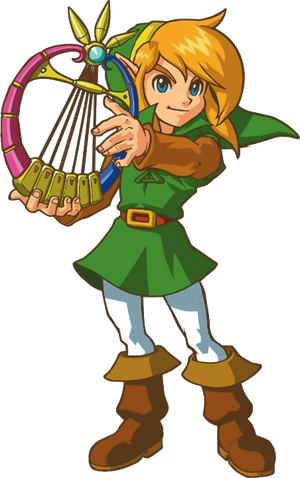 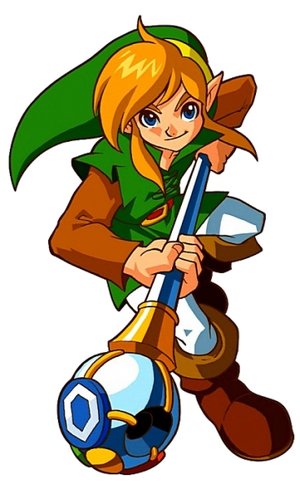 Link is summoned by the Triforce to save the land of Labrynna. Upon landing, he hears a cry for help, and he soon finds that Impa, Zelda's caretaker, is being surrounded by monsters. Link easily scares them off, and Impa asks that he help her search for a woman named Nayru. After finding Nayru, it is revealed that Veran, the Sorceress of Shadows, possessed Impa in order to manipulate Link into leading her to Nayru, who turns out to be the Oracle of Ages. Veran quickly takes over Nayru's body, which she uses to alter events in the past to ruin the future. It is Link who, with the help of the Harp of Ages, travels through time in order to rescue the Oracle and restore the ages back to normal. After Link frees Nayru from Veran's possession, the Oracle of Ages teaches the young hero a song crucial to his quest in collecting the eight Essences of Time scattered over the land of Labrynna. Unfortunately, soon after, the Sorceress of Shadows possesses Ambi, the queen of Labrynna in the past, and takes refuge in the Black Tower. Link, with all the Essences in hand, heads over to the sinister tower to defeat Veran once and for all.

Name: Link, also known as Hero of Seasons and Ages

Origin: The Legend of Zelda: Oracle of Ages/Oracle of Seasons

Powers and Abilities: Superhuman Physical Characteristics, Weapon Mastery, Holds a third of the Triforce (The Triforce of Courage grants protection against evil magic), Enhanced Senses (With discovery ring), Transformation (With octo ring, moblin ring, like like ring, subrosian ring, and first gen ring), Season Manipulation (With the rod of seasons Link can change the seasons at will), Time Travel (With the Harp of Ages Link can travel through time), Minor Flight (With Roc’s Cape Link can glide for a short period), Fire Manipulation (With ember seeds & slingshot), Movement Negation (Can steal speed with pegasus seeds), BFR (Can remove enemies from the battlefield with the gale seeds), Explosion Manipulation (With bombs), Magnetism Manipulation (With the magnet gloves), Statistics Amplification (With pegasus seeds, power ring, expert's ring, red ring, blue ring, green ring, blast ring, rang ring, toss ring, and swimmer's ring), Possible Instant Death (Whimiscal Ring has a rare chance of doing a one-hit kill), Regeneration (Low-Mid, Recovers his hearts slowly with heart ring), Paralysis Inducement (With the boomerang), Teleportation (With gale seeds), Fragrance Manipulation (Has seeds that give off a smell that attracts enemies away from him), Non-Physical Interaction (Can kill ghost), Power Nullificatiton (With peace ring can prevent explosions), Damage Reduction (With protection ring can minimalize all damage to one heart. blue ring that halves damage), Earth Manipulation (With Roc's Ring, can keep floors from crumbling), Age Manipulation (Mystery seeds can potentially revert the age of someone hit by it to an infant), Curse Manipulation (Could theoretically curse someone if he put the cursed ring on them, but this would be incredibly out of character), Resistance to Electricity Manipulation (With Green Holy Ring), Fire Manipulation (With Blue Holy Ring), and Energy Attacks (With blue luck ring), Power Nullification (With whisp ring, and mystery seeds. The mystery seeds negated Veran's possession), Sealing, & Curse Manipulation (With whisp ring), Magic (With the Master Sword), Physical Attacks (With Red Holy Ring, Green Luck Ring, Gold Luck Ring, and Red Luck Ring), Blunt Force Trauma (With steadback ring, won't be knocked back), Absorption (With the transformation rings, Like-Like's can not steal your shields), Explosion Manipulation (With bombproof ring), Temporal BFR (If he's sent to another time period, the Tune of Currents will retun him back to his own time, if he's put in a situation where he is trapped he'll immedieatly be returned back), Sealing, Soul Manipulation, & Power Absorption (Can hold the Master Sword without any of these repercussions. All Triforce users are unaffected by the affects of the Twilight Realm), Reality Warping (Resists the Triforce's magic with the master sword), Minor Resistance to Vector Manipulation (With quicksand ring, makes Link unaffected by moving conveyor belts)

Attack Potency: Multi-Continent level (Defeated a weakened Ganon, who despite such was dramatically stronger and more of a threat than Twinrova, Onox, and Veran. Wields the Master Sword)

Speed: Massively Hypersonic+ with Relativistic reactions/combat speed (Fast enough to fight and defeat the likes of Onox and weakened Ganon)

Lifting Strength: Class T (The Titan's Mitt should be comparable to the Golden Gauntlets)

Durability: Multi-Continent level (Stood up to Twinrova and their minions, as well as a weakened Ganon)

Range: Extended melee range with melee weapons, up to tens of kilometers with magic ranged attacks. Cross-universal via reality warping with the Triforce

Intelligence: Genius in combat (Should be no less competent then the other Link's, saved two lands along his journey meaning he's had to travel across at least 16 dungeons. Defeated Onox, a general of darkness)

Retrieved from "https://vsbattles.fandom.com/wiki/Link_(Oracles)?oldid=6388574"
Community content is available under CC-BY-SA unless otherwise noted.