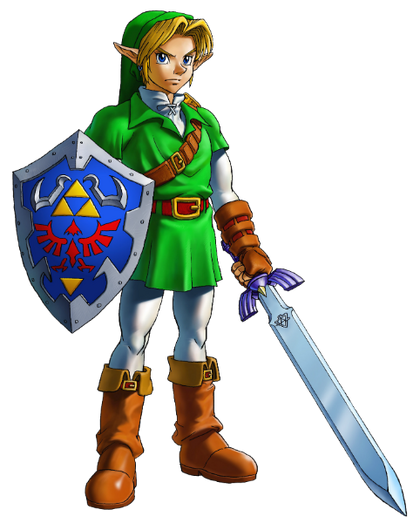 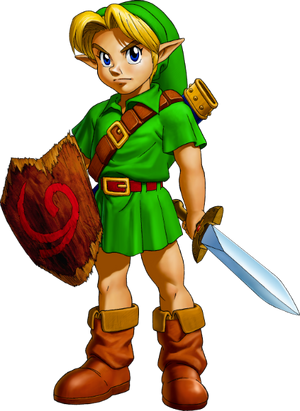 Link is born during the Hyrulean Civil War, and is left in Kokiri Forest by his dying mother in an attempt to spare him from the widespread violence. From then on, Link is fostered by the Great Deku Tree, who raises the Hylian child as a Kokiri so that he will fit in with his peers. However, as Link does not possess a Fairy like other Kokiri, he is always something of an outsider, especially in the eyes of Mido, the self-appointed "Boss of the Kokiri".

When Link is a child, the Gerudo King Ganondorf places a curse on the Great Deku Tree in retaliation for the guardian's refusal to hand over the Spiritual Stone of Forest. The Great Deku Tree sends the Fairy Navi to Link, who serves as the boy's Fairy companion for the duration of the game. With Navi's guidance, Link acquires a sword and shield and defeats Queen Gohma, a parasitic monster placed inside the Great Deku Tree by Ganondorf. His health sapped by Ganondorf's curse, the Great Deku Tree bestows the Spiritual Stone upon Link before his death, bequeathing the boy to travel to Hyrule Castle and speak with Princess Zelda. Upon exiting the forest, Link's childhood friend Saria gives him the Fairy Ocarina, with which he can play the various songs he learns on his journeys. Upon reaching Princess Zelda inside Hyrule Castle, the princess tells Link about Ganondorf's malicious plans to take over Hyrule, and tasks Link with finding the Spiritual Stones of Fire and Water.

Link retrieves the two remaining Spiritual Stones, aiding the Goron and Zora peoples who guard them in the process, and sets off for Hyrule Castle Town to place them in the Temple of Time. Just outside the town, he encounters Zelda and Impa as they flee from Ganondorf, who has seized Hyrule Castle. Zelda manages to toss Link the Ocarina of Time as she flees, which he uses in conjunction with the three Spiritual Stones and "Song of Time" to open the Door of Time, revealing the Master Sword, which he pulls from the Pedestal of Time. Upon doing so, however, Link is sealed inside the Sacred Realm for seven years, as in his current form he is not judged capable of saving Hyrule as the Hero of Time.

Link awakens to find he is sixteen, having aged seven years in the safety of the Temple of Light inside the Sacred Realm, while Ganondorf has touched the Triforce and extended his reign over all of Hyrule. Rauru, the Sage of Light, informs Link of the conquest of Hyrule, and instructs him to find the other five sages. Link traverses five temples to rescue the sages and awaken the power within them. They are Saria, the Sage of Forest; Darunia, the Sage of Fire; Princess Ruto, the Sage of Water; Impa, the Sage of Shadow; and Nabooru, the Sage of Spirit. With these five sages awakened, Princess Zelda reveals herself to Link as the seventh sage, only to be captured by Ganondorf. Aided by the power of the remaining sages, Link can enter Ganon's Castle and navigate its depths. He defeats both the King of Evil's Gerudo form and his monstrous Ganon transformation, freeing Hyrule and Princess Zelda. The princess then sends Link back in time to regain his lost seven years.

Origin: The Legend of Zelda: Ocarina of Time

Superhuman Physical Characteristics, Enhanced Senses, Acrobatics, Master Swordsman and Shield Wielder, Expert Marksman, Teleportation (Via Ocarina Songs and Farore's Wind), Barrier Creation (Via Naryu's Love), Non-Physical Interaction (Can see and attack ghosts), Illusion & Perception Negation (Can penetrate illusions, Perception Manipulation, and can see through things with the Lens of Truth), Weather Manipulation (Can manipulate the weather via Song of Storms), Light Manipulation & Paralysis Inducement (With deku nuts, creates a blinding flash of light and paralyzes his foes), Sealing (Can seal enemies and objects inside of one of his empty bottles, even ghost can't escape), Soul Manipulation (Can eat Poes, who are souls. The sun's song can calm restless souls), Telepathy (With the Ocarina's magic, can telepathically speak to Saria), Precognition/Clairvoyance (Not combat applicable. Link foresaw his encounter with Ganon in his dreams), Empathic Manipulation (With Saria's Song. Cured Darmani of his depression, caused him to dance uncontrollably once he heard the song. The sun's song can calm restless souls), Explosion Manipulation (Via bombs & bombchus), Healing (With potions), Limited Animal Manipulation (Cause cows to produce milk when he plays Epona's song), Telepathy (Can restore broken signs with Zelda's Lullaby), Resistance to Transmutation, Memory Manipulation, Mind Manipulation, & Empathic Manipulation (Can spend a long time deep in the Lost Woods without becoming a Skull Kid or Stalfos and isn't a Kokiri)

All previous abilities, to a greater extent, Holds a third of the Triforce (The Triforce of Courage grants protection against evil magic), Stealth Mastery (Snuck through Gerudo Fortress), Elemental Manipulation (Of the Fire, Ice and Light variety via elemental arrows and Din's Fire), Holy Manipulation, Absorption & Attack Reflection (Can redirect sunlight, and absorb and redirect elemental magic via the mirror shield. Can hit back Ganon's attacks with the Master Sword), Power Nullification (Of Magic with the Master Sword), Underwater Breathing (Type 3. Can breathe underwater via the Zora Tunic), Limited Flight (With the hover boots), Resistance to Intense Heat (Via the Goron Tunic), Extreme Cold (Can travel through the ice cavern, an entire cavern made of ice, go in cold waters, etc.), Sand Manipulation (The hover boots makes it impossible for him to sink in quicksand), Sealing, Soul Manipulation, & Power Absorption (Can hold the Master Sword without any of these repercussions. All triforce users are unaffected by the effects of the Twilight Realm)

Attack Potency: Large Mountain level+ (Was more than capable of carving up opponents like King Dodongo) | At least Large Planet level, likely Large Star level (Should be superior to Calamity Ganon. Superior to Zant, who could warp the twilight realm which contains a sun. His light arrows are capable of breaking the magic barriers constructed by Ganondorf inside his tower, they're also capable of stunning and harming Ganon. He is also the bearer of the Triforce of Courage with his powers further amplified by the Six Spiritual Medallions of the Sages)

Lifting Strength: Class 50 (Able to push around large stone blocks) | Class T (The Golden Gauntlets amplify his physical might to this level)

Durability: Large Mountain level+ (Can take hits from the early-game bosses who are comparable to this level of power) | At least Large Planet level, likely Large Star level (Can take hits from Twinrova, Ganondorf, and the like), higher with Nayru's Love (Only Ganondorf has been demonstrated to be able to break through its defenses within the story)

Stamina: Very high (Should be comparable, if not superior, to his Majora's Mask self)

Intelligence: Link, as with every other incarnation of the character, is an experienced fighter in all fields of combat, deftly wielding his sword and shield in accord along with his bow and the magic granted to him throughout his adventures. Even as a child he was defeating monsters several times his size with just a short sword and a wooden shield. In fact, he displays almost instant mastery of any weapon or skill he obtains and is also a great puzzle solver, demonstrating an aptitude for learning and critical thinking

Weaknesses: Several of his powers and abilities are tied to equipment he owns, Farore's Wind, and the Ocarina of Time are not useful for combat purposes. The elemental magic that the Mirror Shield has absorbed can be nullified if it either tries to absorb a different elemental attack, or the absorbed magic drains over time

Note: This Link and the Majora's Mask Link are actually the same person, but in two separate timelines as a result of Link being sent back in time to enjoy his childhood. Not to be confused with the Link from Skyward Sword, or any other incarnation of Link. 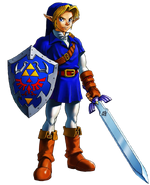 Zora Tunic
Add a photo to this gallery

Start a Discussion Discussions about Link (Ocarina of Time)