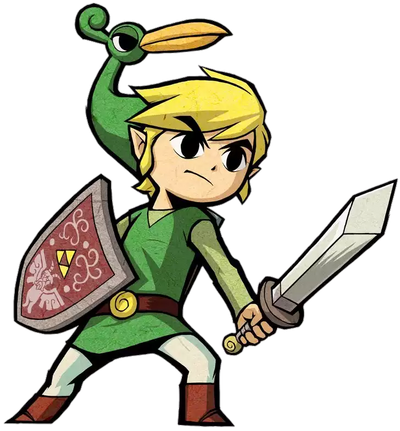 Link is the grandson of Smith, the blacksmith for Hyrule Town. He lives just outside the town with his grandfather, and goes to the Picori Festival with his childhood friend, Princess Zelda. During the award ceremony for the festival's sword tournament, the winner, Vaati, shatters the legendary Picori Blade and releases the monsters that had been sealed in the Bound Chest. Princess Zelda uses her power to send the monsters away, and despite Link's attempt to defend her, Vaati turns the princess to stone to prevent her from interfering with his plans.

Afterward, the King of Hyrule sends Link to Minish Woods to find the Minish, in the hopes that they can reforge the broken Picori Blade so that it can be used against Vaati, the Wind Mage. As he travels though the woods, Link meets Ezlo, his companion throughout the game. Ezlo sits on Link's head throughout his adventure to defeat Vaati and restore Zelda. Aside from his frequent advice and sarcastic comments about Link's quest, Ezlo grants the hero the power to shrink down to Minish size.

Chronologically, The Minish Cap is the prequel to Four Swords and Four Swords Adventures. Like the incarnation in Four Swords Adventures, this Link has almost the exact same character design as the Link from The Wind Waker, other than his hat. This game is one of the earliest games in the timeline, as stated in the official Hyrule Historia. At the end of this game Link acquires a real green hat, as he only had Ezlo as a hat before. Ezlo then said that the hat suited him.

Tier: At least 5-A, likely High 4-C with the Four Sword

Origin: The Legend of Zelda: The Minish Cap

Powers and Abilities: Superhuman Physical Characteristics, Enhanced Senses, Master swordsman, Expert marksman, Able to shrink to the size of a Minish, Able to grow back to normal size, Able to create up to 4 copies of himself through the power of the Four Sword, Energy Manipulation (Can shoot beams from his sword when his at max health and low health, his charged beam can revert the effects of Petrification), Statistics Amplification (Can boost his attack with Din's Charm, His defense with Nayru's Charm, and both attack and defense with Farore's Charm), Light Manipulation (Via light arrows), Attack Reflection (Via Mirror Shield), Limited Flight (Via Roc's Cape), Able to suck up and eject debris at high velocity with the Gust Jar, Can see and hit intangible beings like ghosts, Can levitate and flip objects/enemies with the Cane of Pacci, Resistance to Soul Manipulation

Attack Potency: At least Large Planet level, likely Large Star level with the Four Sword (All four Links were capable of matching a Light Force-amped Vaati, the sword itself was additionally capable of restoring Princess Zelda)

Standard Equipment: Ezlo, the Four Sword, and an assortment of various items he collected during his adventure

Intelligence: Should be no less capable than any of the other Links

Weaknesses: Shrinking in size causes a proportional decrease in all stats (Sans strength once he acquired the Power Bracelets)