VS Battles Wiki
Register
Don't have an account?
Sign In
Advertisement
in: Characters, Game Characters, The Legend of Zelda,
and 32 more 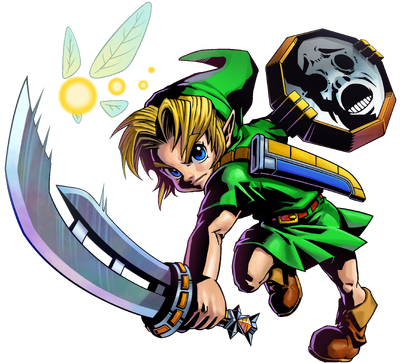 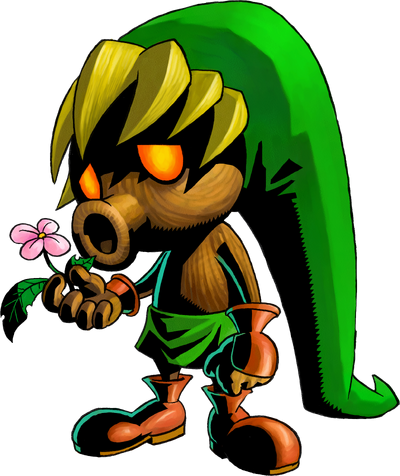 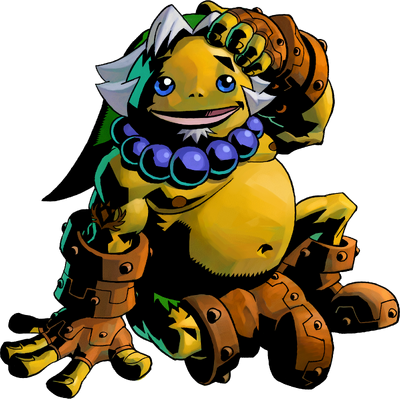 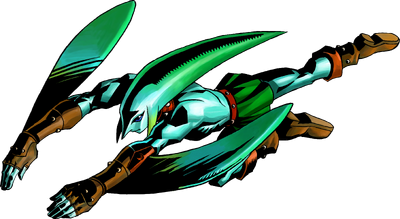 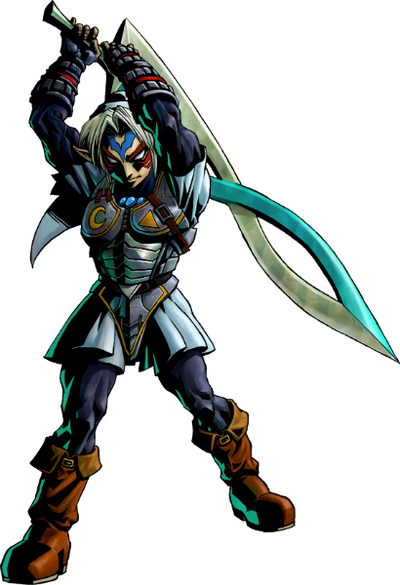 Having been returned to his childhood by Princess Zelda at the end of Ocarina of Time, Link goes on a search for a "beloved and invaluable friend", implied to be the fairy Navi. While traveling deep inside the Lost Woods, Link is ambushed by the Skull Kid and his two friends, the Fairy siblings Tatl and Tael. The Skull Kid makes off with Link's Ocarina of Time, and in the subsequent chase, Link is transported into the parallel world of Termina, where the Skull Kid uses his magic to turn Link into a Deku Scrub. During this process, Tatl becomes separated from the Skull Kid and Tael and joins Link to find them, becoming his Fairy companion for the remainder of the game.

In the caves beneath Termina, Link meets the mysterious Happy Mask Salesman, who agrees to return Link to his normal shape if Link returns Majora's Mask to him, an artifact of ancient power that was stolen by the Skull Kid. As Link embarks on this quest, he learns little by little of the looming catastrophe threatening the land: the Moon in the sky has assumed a horrible, evil face and has abandoned its orbit, and will collide with Termina in exactly three days. Link's quest to restore himself quickly becomes a quest to save the land, during which he not only returns to his original form, but acquires masks enabling him to freely transform between his Hylian, Deku, Goron, and Zora forms.

Eventually, Link succeeds in freeing the Four Giants, enigmatic deities who can halt the Moon's descent, and confronts the Skull Kid. At this point, Majora, the evil entity residing inside Majora's Mask, abandons its now useless host and retreats into the Moon. Link chases after it into the strange core of the Moon, and after a long and heated battle against the three incarnations of Majora, the entity is finally defeated and the menacing Moon disappears. Upon returning the now lifeless mask to the Happy Mask Salesman, Link leaves his new friends and continues his journey, while the people of Termina once more celebrate the dawn of a new day. During the celebration, a Zora identical to Link's Zora form is seen performing with The Indigo-Go's, implying that Link may have returned to the carnival temporarily, though this is never clarified.

Later on, Link lives a life of regret and becomes the Hero's Shade. It should also be noted that he had a child at some point, which led to his descendant in Twilight Princess.

Age: At least 10 (The game is set several months after Ocarina of Time)

Superhuman Physical Characteristics, Enhanced Senses (Can naturally sense people behind him without them making a sound, & with the Mask of Scents), Animal Telepathy (Don Gero's mask allows him to speak to frogs), Weapon Mastery, Stealth Mastery (Sneaked into the Pirate's Fortress), Acrobatics, Genius Intelligence, Precognition/Clairvoyance (Not combat applicable. Link foresaw his encounter with Ganon in his dreams), Holds a third of the Triforce (The Triforce of Courage grants protection against evil magic), Explosion Manipulation (Via bombs, bombchus, and blast mask), Healing (Via potions), Limited Animal Manipulation (Cause cows to produce milk when they play Epona's song), Broadway Force (Bremen's Mask allows Link to have animals and enemies follow him in a marching band), Telekinesis (Can restore broken signs with Song of Healing), Light Manipulation & Paralysis Inducement (With deku nuts, creates a blinding flash of light and paralyzes his foes), Sealing (Can seal enemies and objects inside of one of his empty bottles, even ghost can't escape), Soul Manipulation (Can eat Poes, who are souls), Magic, Elemental Manipulation & Holy Manipulation (Has fire, ice, and light arrows), Teleportation (Can teleport with the song of soaring), Non-Physical Interaction (Can see and attack ghosts), Invisibility via Perception Manipulation (Via the Stone Mask), Self-Sustenance (Type 3 via the All-Night Mask), Mind Control (Of the undead via the Captain's Mask), Mind Reading (Via the Mask of Truth), Empathic Manipulation (Soothe the hearts/souls of others with song of healing, the great fairies mask makes stray fairies not fear Link, the Circus Leader's Mask can cause people to shed tears, Couple's Mask can end bickering upon being worn), Power Nullification (Can dispel curses), Time Manipulation (Can speed up, slow, and rewind time with the variations of the Song of Time), Weather Manipulation (Via the Song of Storms), Summoning (Can summon Epona with Epona's Song or the Four Giants with Oath to Order, can summon a Keaton with the Keaton mask), Sleep Manipulation (Can induce/dispel magical sleep), Creation & Pseudo Duplication (Can create statues of his current form via various melodies), Transformation (Has several transformations via various masks, granting him increased stats and abilities), Illusion & Perception Negation (Can penetrate illusions, Perception Manipulation, and can see through things with the Lens of Truth), Statistics Amplification (The Giant's Mask vastly increases physical strength and range, the Bunny Hood increases Link's speed), Resistance to Soul Manipulation, Perception Manipulation, Transmutation, Memory Manipulation, Mind Manipulation, & Empathic Manipulation (Can spend a long time deep in the Lost Woods without becoming a Skull Kid or Stalfos and isn't a Kokiri), Death Manipulation (Albeit limited, Sharp's song can not instantly kill him), Extreme Cold (Travels top a snowy mountain with only a tunic), Curse Manipulation (If he drinks milk the bubbles curse will no longer affect him), and Corruption

Magic, Situational Flight and Levitation (Via the Deku Flowers), Burrowing (Can burrow himself underground in dirt)

Possible Vibration Manipulation (Causes the ground to vibrate with any of his hits or when he does a ground pound), Resistance to Intense Heat (Via the Goron Mask)

All of the same abilities, plus Energy Projection

Attack Potency: At least Large Island level (Able to physically overpower the likes of Gyorg, who can output this level of energy by just existing) | At least Large Star level (More powerful than Majora without Skull Kid holding him back, who is powerful enough to drop the moon on Termina and wipe the entire world out, as well as create a sun)

Speed: Supersonic+ with Relativistic reactions/combat speed (Fast enough to attack and counter opponents fast enough to deflect his arrows from point-blank range. Has been showed to react to Beamos beams) | At least Massively Hypersonic+ with Relativistic+ reactions/combat speed (Kept up with and killed Majora, a being immensely superior to the likes of Ganondorf and Yuga)

Lifting Strength: Class 50, Class 100 with the Goron and Zora Mask, Class E with the Giant Mask | At least Class E (According to the Ikana Canyon Gossip Stone outside of Sakon's Hideout, the Fierce Deity mask is stated to possess all the merits of the other masks presented in the game, including the Giant's Mask)

Stamina: Very High (Had to run back and forth across an entire farm shooting arrows at ghost aliens from 2 in the morning until the sun came up) | Extremely High (Much higher than without the mask)

Range: Extended melee range, Varies from Tens of meters to Tens of kilometers with ranged weapons, Interdimensional with the Ocarina of Time (Could use its magic in his previous adventure to speak with Saria while she was in the Chamber of Sages, can travel back in time with its magic) | Extended melee range, at least Stellar with energy blasts, Interdimensional with the Ocarina of Time

Intelligence: Genius. Can use items right after wielding them, regarded from Tatl as good, defeated Skull Keeta in combat who led the Ikana Army who commented that he skillfully defeated him. Bested the Garo Master in combat, who states Link was spectacular, the Garo's are trained assassins. Could defeat King Igos Du Ikana's lackeys one of which comments they were the best swordsman of Ikana Valley, and defeated King Igos himself who was stated by Tatl to be on a whole different level from the other two. Could get through Stone Tower which King Igos states that not even hundreds of his soldiers could topple it. At this point, Link is a seasoned adventurer, having the events and experience of Ocarina of Time under his belt. Link also adapts extremely well to his new bodies, as well as the new powers and abilities granted to him when he transforms via the use of one of his masks

Weaknesses: Using the Deku Mask lowers Link’s physical strength (though he's still able to wreck large chunks of ice) and is weak to fire, Zora Link is weak to fire and ice, Goron Link is slow (except while rolling and punching) and can not swim, and to use the Giant’s Mask, Link needs a constant supply of magical power. Has a limited supply of magical energy available to him normally, and some of his equipment has limited ammunition

Note: This Link and the Ocarina of Time Link are actually the same person but in two separate timelines. Time travel was involved.