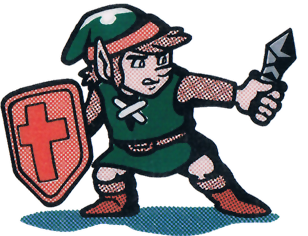 This Link is the protagonist of the ambiguously canon Game & Watch The Legend of Zelda game. Zelda was kidnapped by the 8 evil dragons, who cannot live in peace with man. They lock her up in a dungeon that can only be opened up with the Triforce.

Note that in later references to the Game & Watch games, every protagonist has been seemingly retconned to be Mr. Game & Watch, even when the protagonist was another character originally.

Origin: The Legend of Zelda/Game & Watch

Powers and Abilities: Superhuman Physical Characteristics, Energy Projection with his sword, Resurrection | All the abilities of The Triforce

Key: Base | With the Triforce