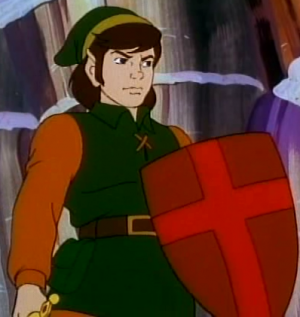 Living in North Castle with Princess Zelda and King Harkinian, Link is in charge of protecting the Triforce of Wisdom from falling into Ganon's hands. However, he dislikes his new lifestyle, claiming that it is boring and would rather be off fighting monsters and roaming the world. The only positive thing, he says, is that he gets to be in company of Princess Zelda, who usually dislikes Link's overall personality. Despite this, it is revealed in "The Missing Link" that she loves the young hero anyway but would rather keep it a secret to prevent it from going into Link's head. Link is persistent at any rate in trying to get Zelda to kiss him, and asks for a reward any time the young hero saves her. Any time that seems like Zelda is about to kiss him, they are always interrupted by Spryte, Ganon's minions or even Link's own clumsiness ruining the moment, leaving the young hero frustrated. Link's motives for rescuing Zelda are not always a kiss, however, as he seems to genuinely care for her and would do anything to save her, which seems to be his weakness. Even so, he will take any chance to impress Princess Zelda or even to make her jealous.

Superhuman Physical Characteristics, Enhanced Senses, Body Control, Dimensional Storage (Can store all his items in a pocket), possible 4th wall awareness (Has winked and looked at the audience on a consistent basis.)

Statistics Amplification, Magic, Energy Manipulation, Minor Danmaku, Forcefield Creation, Weapon Mastery, Power Nullification (Nullified the magic of the Zola. Restored the lizard from Ganon's magic.), Teleportation (Via whistle), Limited Flight (With his shield), Non-Physical Interaction (Link can harm  intangible beings of elemental variety), Possible Regeneration Negation (Mid-High. The water monsters could not reform after being hit by his beams), Existence Erasure (Link's sword beams can destroy your body and soul as Zelda states that the beam bouncing around weakened Ganon's magic which only destroyed Link's body and not his spirit, Link as a spirit was afraid of being hit by his own sword beam. Please check the note for more info.), Resistance Negation (Link requires 3 shots to normally affect Ganon, but with some other items he can do it in one hit)

Resistance to Magic (With the magic bracelet, Link could resist Ganon's magic.), Existence Erasure ("Real people" are naturally more resistant to the beams then magical creatures.), and Fire (Can block fire with his shield.)

Attack Potency: At least Wall level (Defeated multiple Tinsuits who can destroy heavy stone walls just by falling over and continued to do to so without his sword, which is one of the strongest things he has. Hit Zelda's door so hard that North Castle itself shook so much that rocks were falling from the ceiling), Building level+ with equipment (Equipped with a bomb that could perform a feat like this ) | Building level+ (With the Magic Bracelet, Link resisted Ganon’s magic, Link can destroy chains that easily held his normal form’s powers at bay, Ganon's magic includes things like a bomb that could do this.)

Speed: Subsonic+ with Supersonic reaction speed (Killed multiple Stalfos before they could even move in various episodes, Moblins move in slow motion to Link, after being launched a multi-city distance in a few second span Link was easily able to see the ground [The Ringer])

Lifting Strength: At least Class 5 (Feels no knockback to the Crissword's blasts even with one hand, while Zelda does) | At least Class 10 (Could lift Ganon even though he was using his magic to try to resist him)

Durability: At least Wall level (Can survive in a weak tornado for a while, can tank hits from Tinsuits, who can do this) | Building level+, higher with Forcefield Ring (With the Forcefield Ring, Link can no-sell countless Octorok blasts at once)

Intelligence: Generally very smart and has knowledge in using many weapons and household items. Can also call upon the advice of the Triforce of Wisdom, which is omniscient.

Weaknesses: Can sometimes get caught up in being a hero and get distracted from doing something important. That being said, this does not affect him in any way if he does not have anyone around who he wants to impress. | The power bracelet only lasts 10 minutes.

Note: There are some that argue in this episode the reason Link avoids his sword blast is because he continually forgot about being a spirit, thus he dodged it due to that. However, that's actually not the case as a couple of seconds ago he remembered he was a soul. He also doesn't forget about him being a spirit again after that specific scene except for one more time where he wasn't thinking about that cause Zelda agreed to kiss him, also whenever it's meant to be a scene played for laughs about him forgetting he's a spirit they specifically mention it, they make no mention of it here and Link just tells her she's shooting it wrong. Thus, Link does not forget about being a spirit during this moment.

Note 2: There are also some that argue his beams only works on magical creatures. However, Link's affected by Ganon who uses similar power, as a spirit he was afraid of being hit by his beam, and regular non-magical objects have the same effect as when the beam hits magical beings. Thus, the existence erasure is not only limited to magical creatures.

Finn the Human (Bloons Tower Defense) Finn's Profile (Base Finn was used, Link only had 9-B weapons, and speed was equalized)