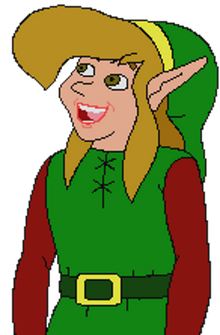 Link is the primary protagonist of Link: The Faces of Evil, a non-canon Zelda title made for the Phillips CD-i. Unlike most other incarnations, this Link is shown speaking. His story starts off with him lounging around in his castle, bored and eager to go on an adventure, when a wizard named Gwonam flies by and informs him that Ganon and his minions have taken over the island of Koridai, and that a written prophecy confirms Link is the only one capable of stopping him.

Tier: 9-A, higher with the power glove

Age: Likely in his late teens

Powers and Abilities: Superhuman Physical Characteristics, Swordsmanship, Magic, Limited Empathic Manipulation with his sword, Fire Manipulation, Attack Reflection (Via Reflecting Shield), Invisibility Negation (Via the Lantern of Vision), Jump Augmentation (Via Winged Helmet), Limited Time Manipulation (Via Bell, which freezes airborne enemies in mid air), BFR (Via the Book of Koridai), Dimensional Storage (His magic pouch allows him to store everything), Explosion Inducement (Via bombs), Healing (Via water of life), Resistance to Reality Warping (Ganon's mere presence on the island was warping it as Gwonam says after his defeat the island is already turning to normal. Yet Link was completely fine), Transmutation (Unaffected by Ganon's island-wide transmutation and Harlequin's transmutation beams).

Attack Potency: Small Building level (Can trade blows with opponents that are capable of harming him. Killed Glutko, who was so large his hands were the size of adult men), higher with the Power Glove

Durability: Small Building level (His bombs generate this much energy, and he can tank them at point-blank range, even without using his shield), higher with his shield

Stamina: High, can fight bosses and traverse entire levels without tiring out.

Range: Extended melee range with his sword, tens of meters with fire blasts.

Intelligence: At least Average (Link could skillfully defeat the natives who were turned into bloodthirsty warriors)