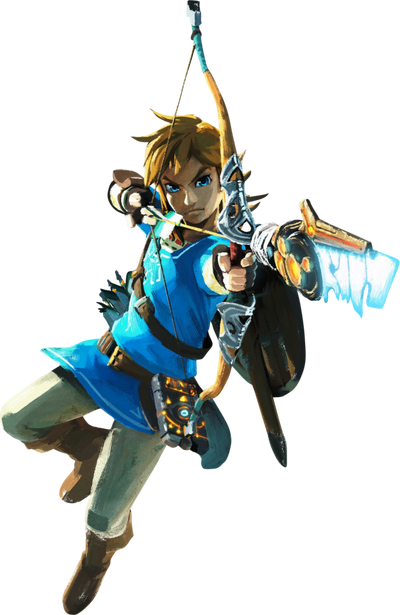 The main protagonist of Breath of the Wild. 100 years ago, Link, Zelda and the four Champions set out to defeat Calamity Ganon using four Divine Beasts. The Champions were all killed, and Link critically injured. Link is placed into stasis, and rests for 100 years. He wakes up with amnesia, and meets an old man who tells him about what happened to Hyrule since Link has been asleep. Link then sets off on a quest to both regain his memories and defeat Calamity Ganon once and for all.

Age: 117 years old, 17 years old physically (Zelda had to be 17 to use the Springs of Power, Wisdom and Courage, and it can be assumed that Link is of similar age to her, was kept in stasis for a century)

Classification: Hylian, Hero of Hyrule, Wielder of the Sword that Seals the Darkness

Attack Potency: Multi-Continent level (Able to wield the Master Sword, which is superior to the Goddess Longsword) | At least Large Planet level (Fought and defeated Calamity Ganon, who in a suppressed state can move the moon closer to the planet and back to its proper orbit at high speeds)

Lifting Strength: Class 100 (Comparable to other Links) | Class T (Should be no weaker than his Wind Waker counterpart with the Power Bracelet)

Stamina: Very high (Can sprint for extended amounts of time, and climb for long periods of time. Can swing heavy weapons around without much fatigue)

Range: Extended melee range with melee weapons, up to thousands of kilometers with ranged weapons

Intelligence: Despite initially suffering from amnesia, he is as skilled as the other Link's, if not far surpassing them. Held in very high regard before the Calamity. The greatest feat of combat prowess is after his 100 year sleep. After losing most of his memories, Link was able to once again become a prodigally proficient sword combatant, as well as picking up several other weapons he had never used before, and using them incredibly skillfully. He defeated all of the Blights, who killed all four Champions 100 years prior, before eventually outmatching, and defeating, Calamity Ganon

Weaknesses: He’s very reckless | Has an immense cooldown on his Champion's Abilities. His information analysis requires him to make a photo of the being he wants to analyze

Key: Before the Calamity | Endgame

Sonic The Hedgehog (Sonic the Hedgehog) Sonic's Profile (Endgame Link and Excalibur Sonic was used, both at 5-A and speed was equalized)

Start a Discussion Discussions about Link (Breath of the Wild)