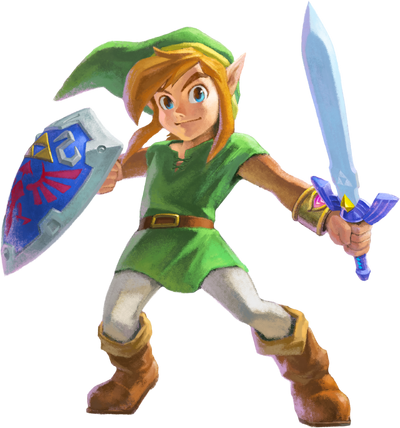 Link is a Blacksmith's apprentice who experiences frequent nightmares of Princess Zelda being snatched away by a pig-shaped creature, which often cause him to be late for work. After a brief encounter with Yuga, Link warns Zelda of the new threat, and she gives him the Pendant of Courage and tasks Link with protecting Hyrule. In his next encounter with Yuga, Link gains the ability to enter and leave walls as a painting, which becomes a vital ability in his quest.

After finding the other two Pendants of Virtue and drawing the Master Sword from its pedestal, Link rushes to Hyrule Castle to defend Zelda, but finds himself too late, arriving as Yuga is turning Zelda into a portrait. After battling Yuga once again, Link chases after him through a glowing fissure in the wall and finds himself in what seems to be a darker Hyrule Castle, where he witnesses Yuga revive and merge with Ganon, granting him the Triforce of Power. However, before the combined villains can attack Link, he is saved by Princess Hilda, who explains to Link that he is in Lorule, a darker version of Hyrule. After she teleports Link out of the castle, he blacks out and wakes up in the Lorule Blacksmith's house.

Link then goes on a quest to find the portraits of the sages throughout Lorule, and the sages grant the Triforce of Courage to him upon his success, allowing Link to confront Yuga. Upon reaching the top of Lorule Castle, Hilda reveals her intentions to save her realm by stealing Hyrule's Triforce and commands Yuga to take Link's piece of the Triforce. After Link defeats Yuga once, the villain turns Hilda into a painting and steals the Triforce of Wisdom from her, revealing that he intended to take the Triforce for himself all along. He then battles Link again, even more powerful now that he holds two Triforce pieces. Mid-battle, Zelda gives Link the Bow of Light, which he uses along with the Master Sword to ultimately defeat Yuga.

Zelda and Hilda are restored, though Hilda does not relent until Ravio appears. He takes off his mask, revealing that he is Link's Lorule counterpart and that he once served Hilda. Hilda declares Ravio a traitor, but Ravio convinces her that she shouldn't destroy Hyrule to avert Lorule's fate, admitting that their land is doomed. Hilda agrees to send Link and Zelda back to Hyrule using the remaining power in Ravio's bracelet, and they end up in Hyrule's Sacred Realm, with the Triforce in front of them. They both wish for Lorule's Triforce to be restored, saving the parallel world. Link then returns the Master Sword to the Lost Woods.

Name: Link, also known as the Hero of Lorule

Origin: The Legend of Zelda: A Link Between Worlds

Age: Appears to be in his teens

Powers and Abilities: Superhuman Physical Characteristics, Enhanced Senses, Magic, Master swordsman, Expert marksman, Elemental Manipulation (Of the fire, ice, wind, and sand variety), Able to meld into walls and become a living painting, Able to see and attack ghosts, Magic Nullification, Energy Projection, Statistics Amplification, Holds a third of the Triforce, The Triforce of Courage (Grants protection against evil magic) | As before, plus is in possession of the complete Triforce | All base abilities, sans he has not the Triforce of Courage

Lifting Strength: Class T (The Titan's Mitt should be comparable to the Golden Gauntlets) | At least Class E | Class 100

Standard Equipment: The Master Sword, the Triforce of Courage, Ravio's Bracelet, a longbow, a boomerang, bombs, a hammer, Fire Rod, Ice Rod, Sand Rod, Wind Rod, and a varied assortment of weapons he's collected over the course of his adventure

Intelligence: Shouldn't be any less competent than any other Link

Key: With the Triforce of Courage | With the Complete Triforce | Tri Force Heroes

Start a Discussion Discussions about Link (A Link Between Worlds)