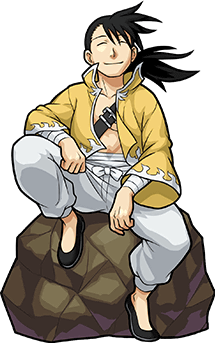 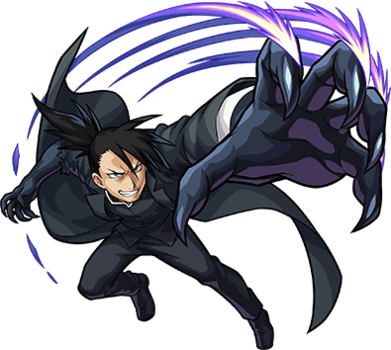 Ling Yao (リン・ヤオ, Rin Yao), also spelled as Lin Yao, is the twelfth crown prince of the eastern nation of Xing and the liege of the Yao clan. Seeking a way to ensure his path to the throne amidst deadly inter-house competition, Ling has ventured from Xing to Amestris in order to divine the secret of immortality of the Philosopher's Stone.

Powers and Abilities: Superhuman Physical Characteristics, Acrobatics, Precognition, Martial Arts, Weapon Mastery, Can detect chi, Bombs, and Grenades (Standard explosives) | Body Control, Can make his skin as hard as diamond, Multiple Personalities, Organic Manipulation,  Regeneration (Low-High; reliant on the philosopher stone which is an exotic matter that can take the form of a solid or liquid. The philosopher stone has shown to not be destroyed by from comparable or higher attack potency to the user unless it runs out of souls used from regeneration. Regeneration will not happen if the amount of soul from the philosopher stone is low, also), Immortality (Types 1, 3 and 8), Self-Sustenance (Type 2), Shares bodies with Greed, Resistance to all poisons, toxins, venoms, viruses, bacteria, allergen, diseases, etc.

Attack Potency: Building level+ (With his sword he managed to easily cut Gluttony and Envy. Can trade blows with Wrath) | Building level+ (Stronger than before. Injured Wrath with a claw strike)

Speed: Supersonic+ (Kept up with a casual Wrath, should be comparable to Edward) | Hypersonic (Somewhat kept up with Wrath)

Durability: Building level+ (Took a hit from Gluttony and Envy. Can block attacks from Wrath) | Building level+. At least Large Building level with Ultimate Shield (Should be just as durable as Greed's shield)

Intelligence: Above average (Has plenty of combat intelligence) | Average

Weaknesses: None | Retains the weaknesses of the first Greed.