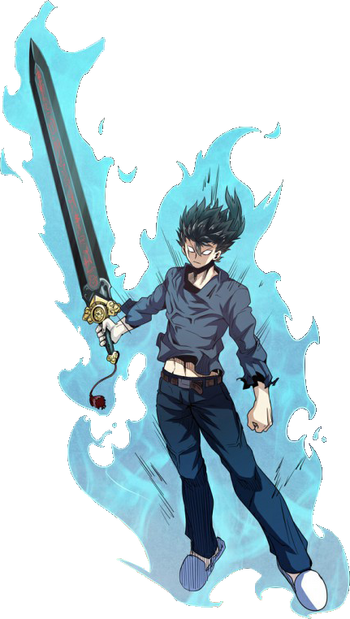 Lin Jie is the main protagonist of the manhua, Hero? I Quit A Long Time Ago.

He saved Humanity from the monster 7 years ago, naming himself Zero. He later disappeared from Humanity after the majority of the monsters were gone. Now, he's looking for a job due to his sister forcing him to get one.

Origin: Hero? I Quit A Long Time Ago

Attack Potency: At least City level (Decapitated Jörmungandr in a single strike), likely Planet level Destroyed an object in space that could be Mars and easily defeated Babaru)

Speed: At least FTL, likely higher (Casually caught Akarin who was moving at the Speed of Light, casually dodged bullets in close range, and went half-way around the World all in 3 minutes)

Durability: At least City level, likely Planet level (Didn't budge from Babaru's attack that was stated to be able to vaporize a small planet)

Stamina: Average (Wasn't exhausted walking for an hour on a long mountain path)

Weaknesses: Does not want any harm to come to Lin Wan, will not hurt the Merfolk under any circumstances unless if it is serious, and will only use Judgement on criminals

Lightning: Can imbue his Equipment with Lightning

Explosion Manipulation: Can create explosions just by flicking his opponents

Slay: Can crush the souls of people

[Galaxy Sword] Can cut through space
Tear: Can create a crack in the fabrics of space to appear in it

Enhanced Senses: Can sense the presence of someone and has very good hearing

Existence Erasure: Is able to erase the existence of someone

[Celestial Executioner] Execute: Damages every incarnation that the target has and the target itself until they're completely destroyed

Extrasensory Perception: Can feel the Aura and Energy of people

[Celestial Executioner] Can feel the Energy of people

Flight: Can fly naturally without any assistance

Forcefield Creation: Can make a Forcefield around himself

[Celestial Executioner] Dome: Creates a dome around herself in which she can infuse it with her Sword Will
[Yeoui] Circle: Draws a circle around the target so that they can be protected with a Forcefield

Sealing: Can seal his Equipment

Stealth Mastery: Could sneak up behind Xiao Zhan and Professor Qin even though the building they were in a heavily guarded building

Summoning: Can instantly change his currently equipped Celestial Sword to another one of the Series instantly and summon various weapons at his disposal

Telekinesis: Can control his Equipment from faraway

Transformation: Can transform into Zero, his other Persona

Water Walking: Can run on water

Weapon Mastery: Is a master in the Art of the Sword

[Celestial Executioner] Is a master in the Art of the Sword

Fate Manipulation Resistance: Can resist the Wizard of Miracle's card reading in which he commented that Lin Jie is someone who can defy destiny