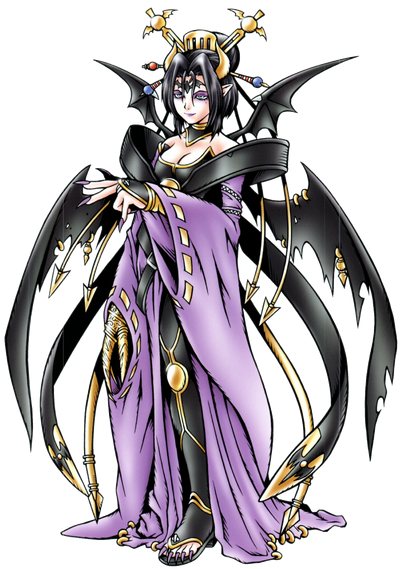 Lilithmon is a Demon Lord Digimon which has the appearance of a woman, and is one of the "Seven Great Demon Lords". It is thought that it was originally the same kind of Digimon as Ofanimon, but it fell from heaven and eventually became known as the "Goddess of Darkness". It confounds its opponents with its bewitchingly lovely appearance, and it is said that those who are taken in by its temptations are invariably granted death. Its reputation as the "Goddess of Darkness" is appropriate, as it offers generosity towards vice, but only cruel outrages towards virtue. The demonic "Nazar Nail" on its right arm corrodes everything it touches. 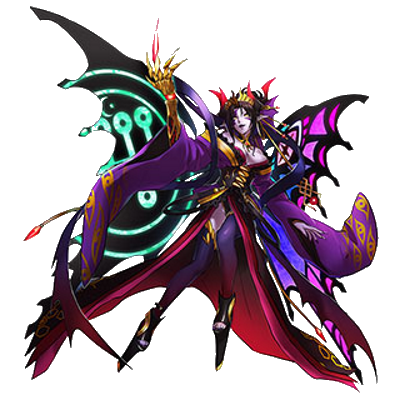 Having X-evolved because of its obsession for beauty, Lilithmon obtained a youthful, bewitching body. It is said that its appearance captivates everyone who sees it, instantly turning them into its puppets. Upon acquiring ultimate beauty, Lilithmon became a luscious, baleful goddess of death due to its tolerant broad-mindedness.

Gender: Genderless, but appears and is treated as Female

Age: Existed since the creation of the Digital World

Superhuman Physical Characteristics, Digimon Physiology, Immortality (Types 1, 3, 5, 7 and 8; It was stated that as long as evil exist in the hearts of man, the Demon Lords shall be reborn), Regeneration (Mid-High), Flight, Energy Manipulation, Poison Manipulation, Forcefield Creation, Portal Creation (On a cross-dimensional scale), Magic, Illusion Creation, Teleportation, Empathic Manipulation, Fire Manipulation, Berserk Mode, Aura, Summoning Material Entities, Can create Black Holes, Corrosion Inducement, Regeneration and Resurrection Negation (Mid-Godly. All Demon Lords negate resurrection and rebirth. This included coming back from non-existence), Abstract Existence (Embodies the sin of Lust in which is a primal factor of the multiverse), Conceptual Manipulation, Dimensional BFR (Can send others to the Dark Area where their essence is erased into nothingness and become aspects of the SGDL.), Existence Erasure, Life Force Absorption, Body Control, Electricity Manipulation, Fire Manipulation, Flight, Earth Manipulation, Hypnosis, Curse Manipulation, Can turn resistances into weaknesses and vice versa, Death Manipulation, Can lower an opponent's durability, Statistics Amplification, Magic and Ranged Attack Reflection, Transmutation and Power Nullification via Texture Blow, Acausality, Nonexistent Physiology (Physical. Lilithmon is a nonexistent being as a natural inhabitant of the Dark Area), Hellfire Manipulation and Conceptual Erasure with Dark Fire (The Flames of Hell/Dark Area aka El Evangelo are purifying flames that erase those who are burnt by them. This goes so far as to being able to erase even the Seven Great Demon Lords and erase one beyond death in which in Digimon death means nothingness. Whether the flames erase one beyond nothingness is dependent on whether they are evil or not. If evil, the one who is erased will be erased beyond nothingness), Resistance to Conceptual Attacks (Resisted getting her very concept attacked by Voltbautamon) and Existence Erasure (Is nonexistent)

Lifting Strength: Immeasurable (Should be in the same league as Minervamon, Marsmon and Vulcanusmon) | Immeasurable

Stamina: Vasty Superhuman for most incarnations.

Standard Equipment: The demonic Nazar Nail on her right arm corrodes everything she touches (Reapmon is fatally wounded by her attack)

Intelligence: As the Demon Lord representing Lust, Lilithmon can be cold, calculating, and manipulative, as showcased when she created illusions with the Ice Mirror to trick Akari Hinomoto into stealing Lake Zone's Code Crown. She is also responsible for manipulating the presidential election of Sky Zone by sending a spy (Lucemon) in order to take the Zone's Code Crown. However, she is prone to explosive emotional outbursts when her plans begin to fail, and will violently lash out at those who dare to spite her.

Weaknesses: Has a tendency to act on impulse, rampant Limerence (Beelzemon in the Anime/Bagramon in the Manga)

Feats: Can travel freely between Zones. Can control at will powerful Digimon such as Daipenmon, Machinedramon or Arkadimon.