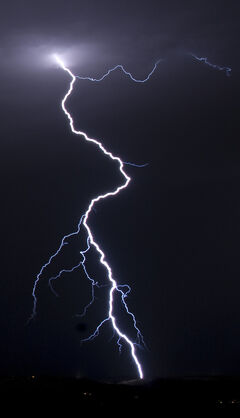 Many fictional characters make use of attacks or equipment that produces lightning or electricity. As such it useful to know how to quantify lightning feats.

What is real lightning?

Most electricity in fiction is not real lightning. Often it is supernatural in nature, and is possibly not even electricity. Therefore lightning is only accepted as such under certain circumstances.

Additionally, for calculations that involve lightning speed, one has to consider that the speed of real electricity can change due to a variety of factors, but for practical purposes, concerning attacks that are electricity-based, if they display power comparable to that of natural lightning, they should be considered to move at a comparable speed. It is required to show that the electricity carries an energy of at least 1.6 billion Joules or a voltage of at least 100 million Volts in order to qualify.

One of the most important speed feats is dodging or reacting to lightning. The following is supposed to provide some short explanations on how fast a character should be ranked through these feats.

The clouds that usually cause thunderstorms build about 200m to 4000m above the ground.[4] In this wiki, 2000m is the standard assumption.

The calculation for the speed a character moves at when dodging/reacting to lightning is a very simple one.

Based on the formula and scientific basis we can now make an estimation on which speed characters, that dodged cloud-to-ground lightning, should be placed at. We do that by inserting the distance values and the speed values into the formula. For the distance the character moved we will assume one meter, as that seems reasonable without further information. Should a character appear to have moved a lot more or a lot less than this, a separate calculation has to be made using the formula above.

Non Cloud-to-Ground lightning can be calculated with the same calculation mentioned above.

It should be noted that as long as the character or machine was not displayed creating cloud-to-ground lightning, it is questionable whether or not the lightning actually moves at average lightning speed, because the scientific knowledge on the speed of lightning is lacking in the current state of science, so that it is unknown which variables that could influence the speed.

The energy of electricity can directly be calculated if its current and electrical potential difference is known.

If the current is a ampere and the electrical potential difference is v volt, then the power of the lightning is given as a*v J/s. Usually 1 second of this is addressed to the AP, unless the electrical flow couldn't be sustained for that long.

It should be noted that for real electricity enduring a lightning strike usually doesn't require durability equal to the lightnings full energy. There are two reasons for that:

Due to this, and possibly other factors, it is for example possible for humans to survive being hit by lightning, even though an average normal lightning contains approximately 1.6 billion Joules. The energy of secondary effects that lightning might cause, can in some cases fully apply on the other hand.

For further information about the minimum energy and voltage requirements, please read this thread.