VS Battles Wiki
Register
Don't have an account?
Sign In
in: Characters, Death Note, Anime Characters,
and 21 more 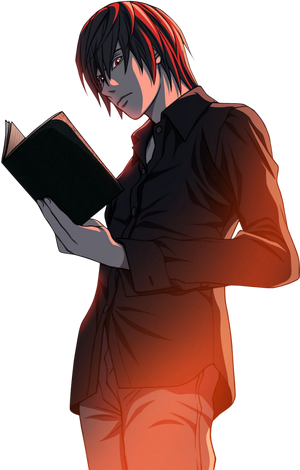 After discovering the Death Note, a supernatural book that would allow him to kill anyone whose name and face he knows, Light Yagami decides to put his intellect to use by passing righteous judgment on the world and ridding it of crime. His killings are labeled the work of Kira - and by some, the work of God.

Tier: 10-A, Unknown with the Death Note

Powers and Abilities: Genius Intelligence, the Death Note allows for Death Manipulation (So long as he knows a person's name and face, he can kill them by writing their name in the Death Note, normally causing a heart attack; the Death Note can cause lethal illness, suicide, and "accidental" deaths through seeming coincidence)

Attack Potency: Athlete level (Fought with L), Unknown with the Death Note (When used normally, the Death Note ignores conventional durability through means of heart attack, but it can be used in other ways and can potentially cause car crashes).

Stamina: Above average; in the anime, despite being shot multiple times by Matsuda, Light was able to escape and run a short distance before collapsing.

Range: Standard melee range, Low Multiversal with the Death Note (Shinigami are capable of killing humans on Earth with it from their separate realm).

Intelligence: Genius. Light is a hardworking, talented, and successful young man with a strong willpower and an even stronger sense of justice. Adored by his peers and family for his skills and friendly exterior, Light is incredibly ambitious, with the cunning and creativity to carry out his goals. His intellect makes him a deadly foe and a tremendous asset to the Japanese Task Force, with L even considering him a potential replacement in the event of his death, despite his suspicion. His plans are inventive, relying on exploiting his knowledge of the Death Note's rules and his confidence, intimidating Raye Penber into turning in his coworkers and unknowingly killing them with the Death Note and engineering a complex scheme in which he would give up the Death Note and his memories, only to reclaim them once suspicion was diverted. One of Light's greatest skills, however, is his penchant for manipulation and his acting skills, keeping up his act even in the tensest of situations and dropping it only when he was finally cornered. Few see through his pleasant exterior, which he has exploited to rid himself of threats like Naomi Misora, and even if they do suspect him, they must still corner him. This is by no means easy, as Light ultimately triumphed over L through his knowledge of the Death Note, precautions, and his manipulation of Rem, and he would've outsmarted Near as well had it not been for Mello's sacrifice.

Weaknesses: Light is extremely arrogant and has a god complex, and can panic when these things are challenged. The Death Note has several restrictions, most notably that Light needs to know his target's name and face to kill them, and it cannot make subjects do things that would be out of character or would kill others.