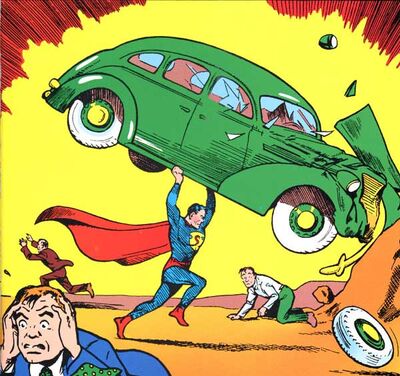 Lifting Strength is defined as the mass that an individual can lift on Earth. In other words it measures the amount of upwards force a character can produce. As such pushing and pulling feats are also considered a part of this statistic, granted they are properly calculated to account for the difference to lifting. A common case is that the weight of something pulled across a horizontal surface needs to be multiplied by the appropiate friction coefficient after finding the mass of the object. Telekinesis or other similar abilities must be specifically referred to as separate from physical strength, when used in a lifting feat. Tearing is also included in this category, but it is an unreliable method of calculating overall lifting ability a vast majority of the time. This is because the force used in a tearing motion is much lower than a lift, as a tearing motion uses much fewer muscle groups and is an awkward application of force compared to other movements. Likewise throwing an object a certain height upwards can be used as lifting feats, as these would require greater strength than just lifting the object.

While Striking Strength measures the energy of a character's physical attacks, Lifting Strength measures the amount of mass they can lift, which is determined by the amount of force a character can produce. This means that they measure two different physical quantities. Furthermore it can't be assumed that a character that can physically produce the amount of energy used in lifting an object by a certain height can also lift it, if it didn't demonstrate the ability to produce that level of Lifting Strength. It is a common feature within fiction to feature characters capable of vastly greater physical striking strength energy outputs than what would be required to lift weights that they are repeatedly shown to struggle with.

Hence Lifting Strength and Striking Strength are in general not comparable and should be evaluated separately.