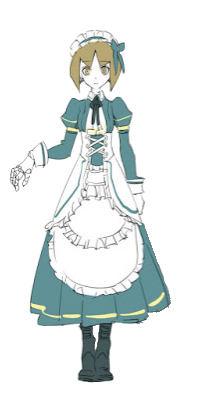 Libra of the Scales is one of The Twelve Heavenly Stars. She is a golem crafted by One of the Seven Heroes Mizar and is Ruphas' highest level minion at level 910.

Name: Libra of the Scales

Powers and Abilities: Superhuman Physical Characteristics, Homing Attack (Has bullets which home in on her opponents, Brachium automatically hits her target), Resistance Negation (Brachium ignores resistances), Pressure Points (Brachium ignores defenses and penetrates the body), and Deconstruction (Can completely eliminate her opponent not even leaving a speck of dust behind) with Brachium, Information Analysis (Can see her opponents level, remaining HP, and their stats), Enhanced Senses (Can scan the bio-metric data of others. Can sense the breathing, actions, gazes, speech and muscle movement of others. She can also hear the sound of a pebble from two hundred kilometers away and has X ray vision), Longevity, Photographic Memory, Light Manipulation, Extrasensory Perception (Can sense mana, and life), Inorganic Physiology (Type 2), Flight, Natural Weaponry (Can transform her body into weapons), Spatial Manipulation (When using Brachium she creates an isolated space to prevent the enemy from escaping and avoid unnecessary destruction), Self-Sustenance (Types 1, 2, 3), Precognition (Libra can predict her opponents future moves based on past data), Light Manipulation, Vibration Manipulation (Can attack with vibrations), Sound Manipulation (Can deliver an ultrasonic attack), Self-Destruction (Can cause Astraea to self-destruct), Power Nullification with Brachium (Brachium bypasses skills and directly deals damage to people, such as those are buffed with having luck that grants them absolute evasion), Resistance to Willpower Manipulation, Fear Manipulation (Should be able to resist Ruphas Coercion), Memory Manipulation (Dina's memory manipulation doesn't work on her, as golems don't have memory only data), Madness Manipulation (Type 2, Can resist Aigokeros madness manipulation that affected an entire country. Unaffected despite being right next to Thulhu and Aigokeros who can drive everything insane within several kilometers just with their presence), Poison Manipulation (Poison is ineffective against golems), Soul Manipulation (As a golem she lacks a soul), and Heat Manipulation (High level monsters can withstand -100 degrees Celsius with no issues)

Attack Potency: Moon level+ (While inferior to Level 1000's such as Ruphas Mafahl and Benetnash, multiple members of the Twelve Heavenly Stars working together can contend with them. Astraea with which she can harm Level 1000's makes her 4x stronger, thus she is 4x weaker than Level 1000's), Small Planet level with Astraea and Brachium (Ruphas wondered if Karkinos who is as durable as herself could tank Astraea. And Libra has used Astraea to harm Level 1000's such as Leon and other Level 1000's resurrected by The Goddess. With Brachium she is superior to Ruphas)

Speed: Relativistic+ (While inferior to Level 1000's such Ruphas and the Demon King, her fellow Twelve Heavenly Star member Scorpius who she is comparable to, is stated by Ruphas to be fast even when compared to the Demon King. Was able to keep up with Leon, another Level 1000. Her speed is said to be about the same as Mutant God, Thulhu)

Durability: Moon level+ (While she can be easily defeated by Level 1000's such as Ruphas, Libra is able to tank their attacks though with serious injuries)

Intelligence: Libra is more accurate and precise than modern computers, capable of estimating her chances of winning against her opponent, along with learning their opponent’s movements and making adjustments to compensate. Once she fought something once, she analyses their habits and weakness, and apply it to the subsequent fights. By examining the angle of a fallen arrow, along with wind direction and air resistance, she can estimate the position where it was fired from.

Weaknesses: Brachium can only be used once every 24 hours. Weak against fire.

Libra Use Astraea!
Add a photo to this gallery

Start a Discussion Discussions about Libra of the Scales