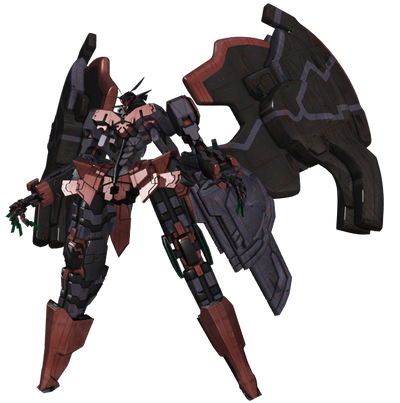 Powers and Abilities: Superhuman Physical Characteristics, Regeneration (High-Mid), Flight and Levitation, Teleportation, Absolute Zero attacks via Hyperborea Zero Drive, Energy Blasts via Abracadabra, Black Hole Creation (Can shoot mini-black holes from its hand via Darkness of N'Kai), Summoning (Is able to summon an army of cosmic horrors to consume the enemy), Aura (Can radiate a battle aura intense enough to disintegrate any creature weaker than the Liber Legis) | Same as before but on a far higher scale

Attack Potency: Island level (Overpowered God Beast Ithaqua with ease) | Universe level (Destroyed an entire universe in its battle with Demonbane), Multiverse level+ with Shining Trapezohedron (Turns infinite parallel universes into a barrier to seal the opponent , and can also be used to create and destroy new ones)

Stamina: Limitless (Both due to being a robot and drawing upon infinite energy from the Heart of Infinity)

Intelligence: N/A, as it is a robot with no capacity for thought, but its pilots (Master Therion and Etheldreda), possess incredibly vast knowledge of magic (Etheldreda being the oldest grimoire in existence while Therion is regarded as the greatest mage of all time), while Therion himself has countless eons of experience fighting Demonbanes with infinite different abilities

Retrieved from "https://vsbattles.fandom.com/wiki/Liber_Legis_(Zanma_Taisei)?oldid=6233139"
Community content is available under CC-BY-SA unless otherwise noted.