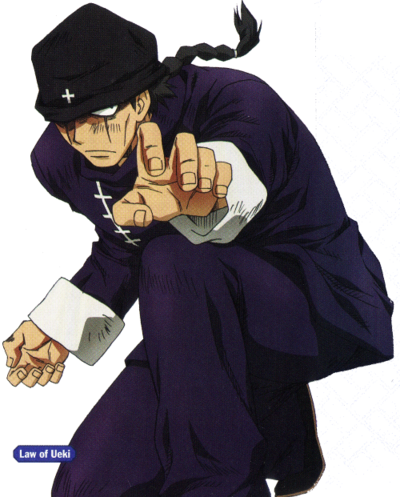 Li Ho (李崩, Ri Hou) is a power user in manga and anime Law of Ueki. He considers Ueki his rival and wants to become a strong fighter in honor of his father, who fell victim to the plague.

Attack Potency: Large Building level+ (Able to fight against Ueki) | At least Island level (Effortlessly knocked down 8-star Ueki. Managed to fight off Anon better than everyone else)

Speed: Subsonic+ (Can keep up with Ueki) | At least FTL (Easily dodged and countered attacks from Ueki), higher with chi manipulation (Able to channel his chi through whole body to increase his speed)

Lifting Strength: At least Class M (Should be comparable to Ueki)

Intelligence: Li Ho is a master of martial arts from 7 years of bloody training. With these skills alone, he gained his victories against several power users even he didn't use his supernatural power.

Retrieved from "https://vsbattles.fandom.com/wiki/Li_Ho?oldid=5931515"
Community content is available under CC-BY-SA unless otherwise noted.