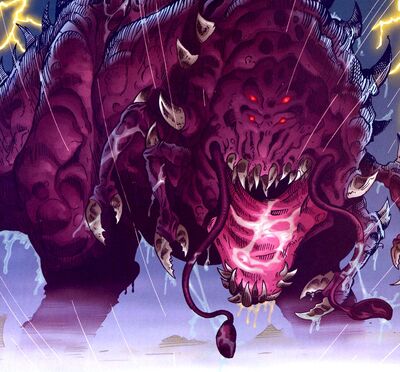 The Leviathans are an ancient species of bioengineered serpentine creatures created by fallen Dark Jedi during the Hundred-Year Darkness. Some sources speculated that they may have been created by Karness Muur; however, Sorzus Syn took credit for their creation in her chronicle.

Attack Potency: Planet level (Full-grown Leviathans were able to wipe out most of the Lost tribe of the Sith and killed an entire army of The Doomed, a splinter group of Jedi and Dark Jedi. A single juvenile Leviathan was able to fight and nearly overpower Jedi Knight Kyp Durron, while a fully grown Leviathan was able to match Kyp as well as Jedi Knights Dorsk 82, Kirana Ti, and Streen )

Intelligence: Animalistic (Leviathans are constantly portrayed as having the cognitive intelligence and reasoning of a non-sentient pet.)

Retrieved from "https://vsbattles.fandom.com/wiki/Leviathan_(Star_Wars)?oldid=4359758"
Community content is available under CC-BY-SA unless otherwise noted.