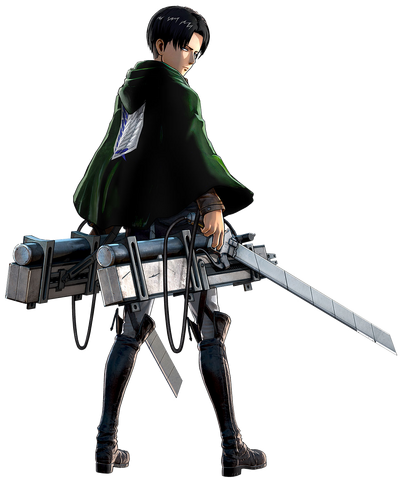 Levi Ackerman, is the squad captain of the Special Operations Squad within the Survey Corps, and is widely known as humanity's strongest soldier.

Tier: 9-A, 8-C with Equipment, higher with Thunder Spears

Attack Potency: Small Building level (Due to his Awakened Power as a result of being a member of the Ackerman Clan, Levi can manifest power comparable to that of a Titan), Building level with Equipment (Can easily cut through Titans. Severely damaged the Female Titan and Jaw Titan. Stomped the Beast Titan three times and would've killed him each time if he didn't need Zeke alive to get information out of him), higher with Thunder Spears (Capable of shattering the Beast Titan's and Armored Titan's Hardened skin and damaging the War Hammer Titan)

Speed: Peak Human, Subsonic with 3D Maneuver Gear (101 m/s), with Supersonic reactions and combat speed (Blitzed the Female Titan and the Beast Titan multiple times before they could react. Sliced the Jaw Titan's jaw muscles before it even knew it had been damaged. Dodged bullets)

Lifting Strength: Class 1 (Would need to be able to lift this much to be able to handle the force exerted on his body by the 3D gear)

Durability: Small Building level (Can survive the energy exerted on his body by the impact of landing at high speeds on solid surfaces with the 3D Maneuver Gear, which would yield 331532.5 Joules. Took an attack from the Female Titan, but his ankle ended up broken. Took a Thunder Spear at point-blank range and survived, though with severe injuries)

Stamina: Very high (Can use Vertical Maneuvering Equipment for hours despite it being known to be a taxing device to use in addition to remaining conscious after grazing blows from the Female Titan)

Intelligence: Gifted (Due to being a member of the Ackerman clan, Levi has inherited the combined skill of every Ackerman that lived before him from his connection to the Path of the Ackermans. Renowned as "Humanity's Strongest Soldier," Levi is widely respected as the best user of Vertical Maneuvering Equipment. He has demonstrated such mastery with the Vertical Maneuvering Equipment that he was able to incapacitate the Female Titan on his own and subdued the Beast Titan on two separate occasions. Levi also uses a distinctive fighting style that involves holding his right sword backhanded with the blade facing out and being behind him instead of in front of him. By doing this, the blades cut in a circle around him, giving him the ability to utilize spinning attacks, which allows him to maintain momentum for relentless strikes while also enabling him to use his stamina and strength efficiently. Aside from his extraordinary battle skill, Levi has shown a profound ability to quickly analyze situations and make calculated decisions in the heat of battle, which has given him the ability to save himself and his comrades on many occasions)

Weaknesses: His abrasive personality and perfectionism make him an ineffective team player.