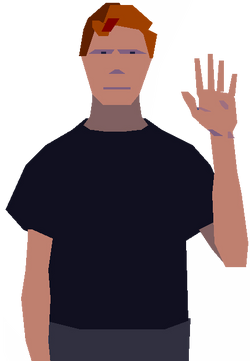 Lester Knight Chaykin is a young genius physicist. One day Lester arrived at his high-tech underground laboratory in his Ferrari 288 GTO during a thunderstorm and he went to work on his experiment using a particle accelerator, attempting to reconstruct what happened when the universe was born. Immediately before the particles reached their intended destination, a lightning bolt striked the laboratory and interfered with the accelerator, causing an unforeseen particle fusion and an explosion, which opened a hole in time and space which teleports Lester to a barren, alien planet. After evading a number of dangerous indigenous animals, Lester was captured by a race of humanoid aliens and taken to a subterranean prison camp. Lester escaped along with an alien captive known as Buddy and the two of them must evade capture while travelling through a series of dangerous environments, battling alien soldiers and wild creatures while solving numerous puzzles in order to survive.

Tier: 10-B physically, at least 9-B with the Laser Gun

Powers and Abilities: Genius Intelligence and Light Manipulation (Via the Laser Gun)

Attack Potency: Human level physically, at least Wall level with the Laser Gun (The Laser Gun disintegrates lifeforms at its weakest and can destroy cave walls and metal doors at full power)

Speed: Athletic Human (Can out-maneuver and out-run alien predators for a few minutes), Speed of Light with the Laser Gun

Durability: Human level physically, at least Wall level with the Laser Gun (The Laser Gun can produce a force field that can withstand shots from other laser guns)

Stamina: Above Average (Can out-maneuver alien predators and keep running)

Range: Standard melee range to tens of meters with the Laser Gun

Intelligence: Genius (Highly skilled physicist, inadvertently created a hole in space time while working on a device to recreate the origin of the universe)

Retrieved from "https://vsbattles.fandom.com/wiki/Lester_Knight_Chaykin?oldid=4718010"
Community content is available under CC-BY-SA unless otherwise noted.