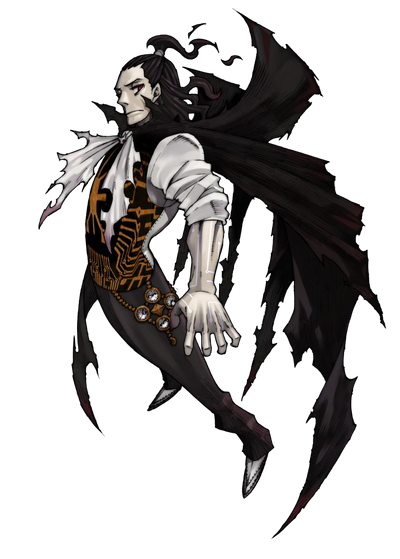 Lester DeRosso is the Archduke of Eternia and the holder of the Vampire Asterisk. Born to the illustrious House DeRosso, he was made a clergyman of the Crystal Orthodoxy at the tender age of nineteen years old, only to be forced out by refusing to vote for the first Grand Patriarch, leading to the destruction of the Kingdom of Eternia, his family, and his people. He would have let himself burn to death in his flaming castle had he not heard a strange voice calling out to him, granting him eternal life in the process, a gift which he used to wage a war against the Crystal Orthodoxy for over two thousand years.

During his final clash with his rival, Grand Inquisitor Sage Yulyana, a gravely injured "angel" descended from the heavens and stopped their fight, warning them of a much greater threat to come before succumbing to her wounds. From then on the two rivals joined forces, starting the Anticrystalism movement and the besieging of the world's temples, helping to kickstart the events of the story.

Attack Potency: Large Mountain level (Leveled entire mountain ranges in his fight with Sage Yulyana. Casually knocked out the whole party midway through the events of the story. Has absorbed abilities from the same demons that corrupted the Crystals, which each have dominion over a sector of the planet. Can still clash with the entire party on even ground by the end-game), to Continent level (Split a Continent in his fight with Sage Yulyana), much higher with a sacrificial attack (sealed a fraction of Ouroboro's power)

Speed: Massively Hypersonic+ (Mach 1000-1200, matched the Guardians of Light, ware all comparable to Magnolia Arch, who skipped across the surface of the moon, can dodge cloud to ground lightning)

Stamina: Extremely high. Has never shown to tire throughout his entire battle, can steal stamina from his opponents.

Standard Equipment: Wine Sword, Vampire Asterisk (grants him his powers, allows him to pass his powers to others, and creates a nigh-impenetrable barrier that keeps outsiders out during combat)

Intelligence: DeRosso bears over two thousand years of combat experience and knows the entirety of Luxendarc's history from his birth to the present and has shaped history several times in the past. He has fully mastered the Vampire Asterisk and is quite cultured, enjoying wine and paintings as well as rebuilding an entire castle by himself. In addition, he is considered to be one of the wisest and most powerful Asterisk users, with his only rivals being Sage Yulyana and Braev Lee, two other members of the Council of Six.

Weaknesses: More vulnerable to Light Based Magic, several of his special techniques are situational (i.e. Bone Crush fails to work if his opponent is in peak condition and thus cannot be used at the start of the fight), He finds the smell of blood revolting. Might run out of mana if uses his magical abilities too frequently.

Ailment Immunity: Lester is resistant to poison, spells that take away the ability to cast magic and other ailments