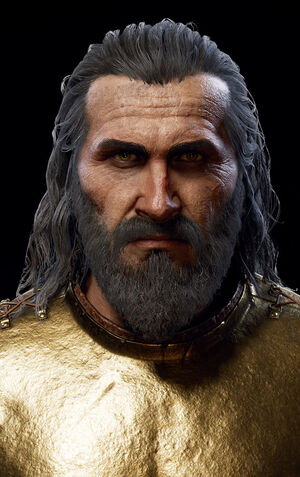 Leonidas I (c. 540 BCE – 480 BCE) was a warrior king of the Greek city-state of Sparta, best known for his involvement in the Battle of Thermopylae against the Persian Empire in 480 BCE. Leonidas wielded an Isu spear, which was later passed down to his daughter, and then his granddaughter, the misthios Kassandra.

A direct descendant of the Isu, Leonidas possessed a proportionally-higher level of Isu genes than usual; consequently, so did his descendants.

In 480 BCE, Leonidas consulted the Pythia of Delphi about going to war against the Achaemenid Empire of Xerxes I of Persia, who had invaded Greece. The Cult of Kosmos, who supported Xerxes I and manipulated the Pythia, threatened Leonidas not to go agaisnt their plans. Nevertheless, Leonidas defied the order and ordered his officer, Dienekes, to gather the army for battle.

Leonidas and his army gathered at a narrow passage way in Malis, where the Persians would have to pass through in order to reach mainland Greece. Prior the battle, Leonidas reminisced to Dienekes about how he would have liked to go fishing with his son. Upon spotting the arrival of the Persian fleet in Malis, Leonidas briefed his men and braced for the attack. During the first wave, Leonidas clashed with and defeated a Persian officer, Kurush.

In the aftermath, one of the Spartans revealed that they had been betrayed by one of the Greeks, who revealed a path behind the passage which allowed the Persians to maneuver around. Nevertheless, Leonidas refused to retreat and ordered his men to defend the pass. The Spartans were able to defend the passage for seven days, though they were eventually overwhelmed. With the death of Dienekes, Leonidas himself eventually perished, but not before killing a Persian officer who delivered a mortal injury to him.

Following Leonidas' death, Xerxes, who was otherwise recognised for his civlity and honor when dealing with his fallen foes, had been so deeply infuriated by Leonidas' defiance that he had his head cut off and impaled on a pike. His remains, along with his spear, were later recovered and returned to Sparta, where he was buried in a tomb southwest of the city, and his broken spear was handed down to his daughter, Myrrine, who in turn passed it on to her daughter Kassandra.

Following Leonidas' death, a statue called the Lion of Leonidas was placed where he fell in Malis.

Tier: At least 9-A physically, higher with Rage Mode and his Spear

Superhuman Physical Characteristics, Peak Human Conditioning (Can hold his breath longer than most normal people), Enhanced Senses, Extrasensory Perception, Clairvoyance, Information Analysis, Retrocognition and Analytical Prediction (Via Eagle Vision, could perfectly recreate and revisit past events that had already happened, could look for objects of interest, differentiate between friend-to-foe, see a person's true intentions and revisit their memories, figure out weak spots, analyze extremely dangerous areas to better understand them, Eagle Vision users are even capable of fighting against characters who have high-level precognitive powers, like in the case when one makes use of the Apple's precognitive powers in battle, and can make accurate predictions of their own in the midst of combat or during investigations with proper concentration), Master Fighter, Weapon Mastery (throwing daggers, swords, spears, bow etc.), Highly skilled acrobat, well versed in the deadly arts of killing, highly skilled in stealth assassination techniques, Expert in parkour, eavesdropping, interrogation, and pickpocketing, Pressure Point Strikes (Capable of knocking out enemies by striking their pressure points, and can also torture them this way), Regeneration (Mid-Low, could survive being repeatedly stabbed and shot with arrows, but ultimately died as he was repeatedly shot in the organs), Extreme Pain Tolerance, Indomitable Will, Can create illusions and bend minds to the user's will (via Pieces of Eden), Healing and Life Absorption (Can heal herself by attacking enemies via certain weapons), Selective Intangibility (Can shoot arrows that phase through walls), Technology Manipulation (As an Isu-Hybrid, Leonidas is capable of interacting with and using First Civilization technology without suffering from any detrimental effects), Poison Manipulation (Some of his weapons have the ability to poison enemies, can also do this via poison darts, including his Spear), Statistics Amplification (via several abilities, Rage Mode and Rush Attacks, also via his Spear), Fire Manipulation and Explosion Manipulation (via his Spear, many other weapons, and arrows), expert user of poisoned knives and daggers. Stealth Mastery, Rage Empowerment, Shockwave Inducement (With the Spear of Leonidas), Time Slow with Sixth Sense, Archery Master, Slow Time and Defensive Maneuvers Skills, Energy Manipulation (via his Spear), Limited Teleportation (Via his Spear), Status Effect Inducement (Can put people to sleep with some of his weapons, via combat maneuvers or even stagger them)

Attack Potency: At least Small Building level+ physically (Due to being a direct descendant of the Isu themselves and containing far higher Isu genes than usual, he should easily be be much superior to most other peak-level Isu-Hybrids like Altaïr Ibn-La'Ahad and Ezio Auditore da Firenze. Can essentially perform the same feats as his grandchildren Alexios and Kassandra, and his highly-accurate simulation made by Aletheia is capable of fighting on par with them. Routinely trades blows with and defeats those capable of harming him), higher with Rage Mode and his Spear (His Spear grants its wielder additional superhuman strength. It can create devastating shockwaves that can one-shot multiple high-ranking enemies, crack through solid stone and easily pierce thick metal shields that can tank attacks from war hammers and effortlessly slice through wood and stone)

Speed: At least Supersonic+ via powerscaling (Shouldn't be much slower than his grandchildren, as seen when his simulation made by Aletheia was capable of keeping up with them, and can perform the same feats as them due to sharing the same movesets), higher with Rage Mode (This enhances all his abilities and allows him to reflect back inflicted damage at twice the rate), Bull Rush (This allows him to relentlessly slice his enemies up before they can even flinch), Sixth Sense (Once detected by enemies, he has a 5-second window to strike where time slows down around him), Slow Time (Can slow down time for up to 7 seconds), Defensive Maneuvers (Upon performing a perfect dodge, he gains a temporary boost to all her statistics), Archery Master (Leonidas' surroundings can slow down while he prepares to attack in mid-air, and even arrow shots appear slow to his eyes) Skills and his Spear

Lifting Strength: At least Class 5, higher with Rage Mode and his Spear

Durability: At least Small Building level+ (Should not be much weaker than his grandchildren and should be superior to other Isu-Hybrids)

Stamina: Extremely High (Fought relentless hours in many battles against the Persians without food, drink or rest. Even when mortally wounded by a volley of arrows and stabbed directly in the abdomen, he could still remain standing and not even be bothered the slightest, living long enough to kill his attacker before dying himself)

Range: Extended melee range, higher with swords and shields. Several tens of meters with his Spear

Standard Equipment: A shield (Discards it later however), a bronze sword, his Spear, which was the blade part of a Staff of Eden

Intelligence: Gifted. Led many successful battles against the Persians and only lost at Thermopylae because his troops were betrayed.

Retrieved from "https://vsbattles.fandom.com/wiki/Leonidas_(Assassin%27s_Creed)?oldid=6313196"
Community content is available under CC-BY-SA unless otherwise noted.