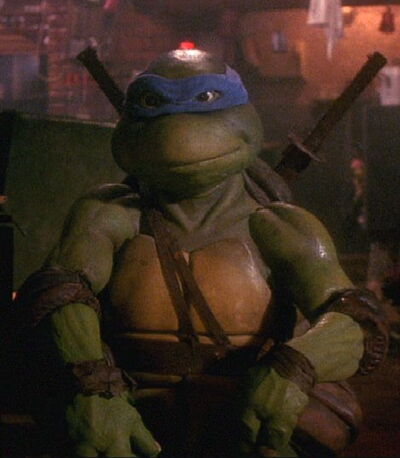 In the first TMNT movie, Leonardo was fairly modest and sensitive, rarely issuing direct commands and seemingly much more relaxed around his brothers thinking of himself as more of an equal than a leader; he also joked around with his brothers much more than in other versions of the TMNT. Since the film was mostly based on the Mirage comics, one can best compare Leonardo's personality with his counterpart from the comics.

Attack Potency: Street level (KOed highly trained Ninjas with one punch, most swords like the one he carries can easily cut off limbs)

Speed: Peak Human (Ran from April’s line of sight in a second), with Superhuman reactions (Cut a pizza in 5 slices while it was tossed in mid-air and before it even hit the ground)

Lifting Strength: Peak Human (Donatello could hold himself to a celling with no leverage with ease so it should scale to Leonardo)

Durability: Street level (Took a massive beatdown and he was still standing)