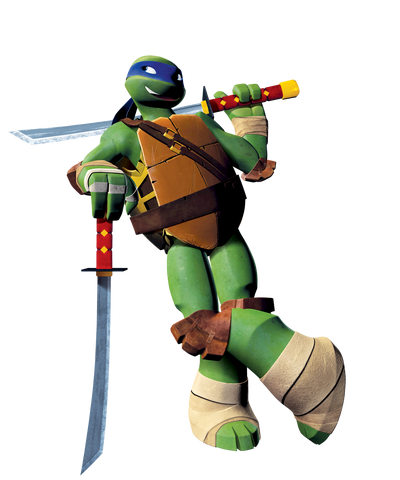 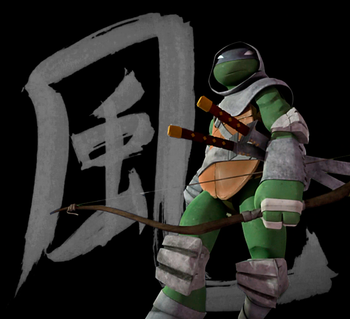 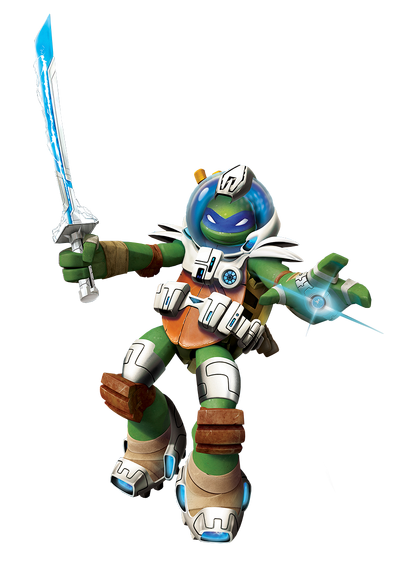 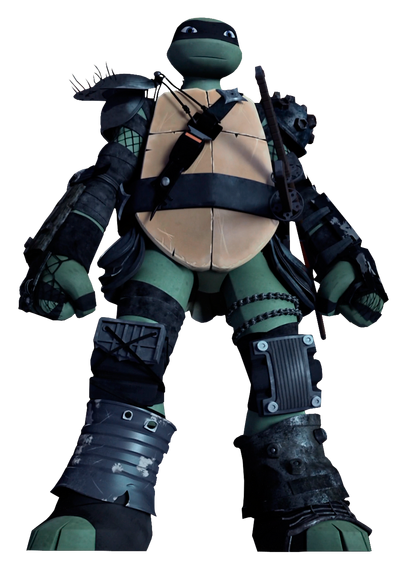 Leonardo, often referred to as Leo, is the leader of the Teenage Mutant Ninja Turtles and the oldest of the brothers, who all share a home in the sewers of New York City. Leonardo belongs to a diverse family consisting of three other mutant turtles who are his brothers: Donatello, Michelangelo, and Raphael; and the ratlike Splinter, who serves as the Turtles' adoptive father and sensei. Due to his persevering dedication towards ninjutsu, (and partly because he asked for it), Splinter chose Leonardo to be the leader of the Turtles. He wields twin katana (or ninjato), indicated in the series as Niten Ryū.

Powers and Abilities: Superhuman Physical Characteristics, Martial Arts (Ninjutsu and Kendo mostly), Weapon Mastery (Katana, Ninjatos, Kunai, Shuriken, Smoke Bombs (Which grant Smoke Screen Generation that can disorient enemies by causing irritation to the eyes and clouding their vision), Yumi, Arrows, Trident, Laser Blasters and Rocker Launchers), Stealth Mastery, Pressure Point Strikes, Regeneration (Low-Mid. He recovered after his vocal cords, his shell and most of his bones were broken after 3 months... a normal human being would have lost his vocal cords and take at least half a year to recover those bones), Healing Technique (Restored Broken Bones in Body with the Healing Chant as well as Rid it of all Poison), Resistance to Perception Manipulation, Fear Manipulation (Overcame the effects of the Fungus Humungous' spores), and Electricity. When empowered by Ho Chan, he gains: Weather Manipulation, Air Manipulation, Lightning Manipulation and Flight

Speed: Supersonic+ (Can dodge lasers and outrun them with no trouble. Can move like a blur and clear the distance of a few meters nearly instantly. Has kept up with Tiger Claw. Despite being far weaker, he has kept up with The Shredder, who can move so fast that he appears to be completely invisible) | At least Supersonic+

Lifting Strength: Class 5 (With sheer strength along, he managed to hold back Kraang Prime, a robot who towered over the turtles. Comparable to Donatello, who can stagger giant robots. On par, if slightly stronger than his brothers, who moved a massive, obsidian alien several meters in a single kick) | At least Class 5

Striking Strength: Small Building Class (Can trade blows with Spike, who tossed around Raphael like a ragdoll, albeit barely. When serious, he can kick away Tiger Claw and matches enemies normally above his level) | At least Small Building Class (Can fight toe to toe with Rahzar, whose considerably stronger than Dogpound, who was a cut above the Turtles early in their training)

Stamina: High (During the Kraang invasion, Leo could fight off a vicious ambush from the Foot Clan for an extended period of time)

Intelligence: Very High in terms of combat (Leonardo is a highly skilled martial artist and master swordsman. Trained by Hamato Yoshi in Japanese sword fighting, his signature weapons are his twin katana. He specializes in Niten Ichi-ryū, in which he uses for high-speed offense and defense, stabbing and dismembering enemies with swift movements and deflecting enemy projectiles such as gunfire, shuriken, and even laser beams. He is capable of going toe to toe with others holding remarkable combat prowess such as Karai, Tiger Claw, and even the Shredder. In addition, he is highly adaptable and analytical, capable of improvising strategies on the spot)

Start a Discussion Discussions about Leonardo (2012)