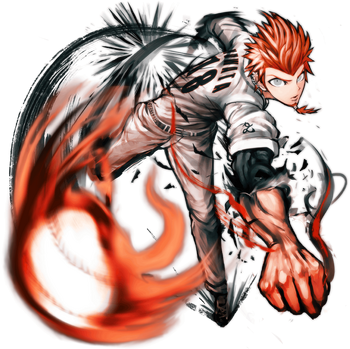 Attack Potency: At least Small Building level (Should be superior to the likes of Chiaki Nanami), likely Building level+ with his talent (Destroyed a Monokuma by throwing Yasuhiro Hagakure's crystal ball on it)

Range: Standard melee range. Around 44 meters with projectiles (Can throw projectiles at 160 kilometers per hour)

Intelligence: Leon is a natural born baseball star despite his hatred towards baseball practice. His talent in baseball surpasses even his coach and teacher's pride who begged him to play so that the team could win a quick and easy win. He states that he never needs to practice because baseball is so easy to him. His pitch is clocked at 160 kilometers per hour. Leon proves his skills with his talent during his murder of Sayaka when he threw a crystal ball through the Trash Room gate to activate a small button on the incinerator at nearly thirty feet away, followed by throwing his own blood-stained shirt into the small opening.

Weaknesses: According to Kazutaka Kodaka, Leon can't stand the heat and hot weather