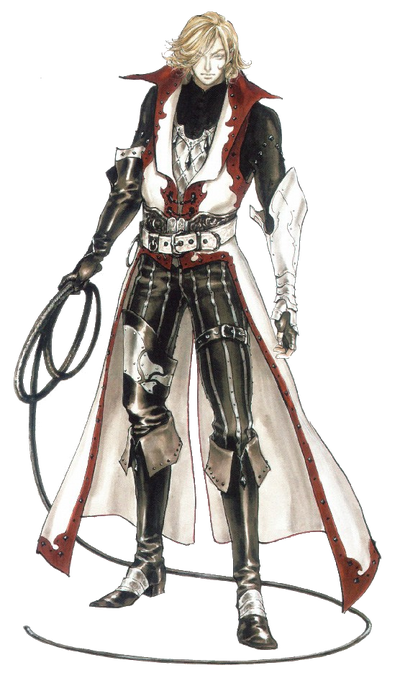 Leon Belmont was a noble knight in Europe during late 11th century, and the protagonist of Castlevania: Lament of Innocence. He lost both parents at a very young age, and was knighted at 16. Leon was also a good friend of Mathias Cronqvist. When his dear lady Sara Trantoul was whisked away by the vampire Walter Bernhard, he entered the castle grounds unarmed, but was given a Whip of Alchemy, a whip that was blessed with the power of alchemy, by the old man Rinaldo Gandolfi, who lived on the grounds. Using his whip and magic gauntlet, he entered the castle in hopes to find and rescue his fiancée. Leon is the earliest named member of the Belmont Clan. He was the first to use the Vampire Killer and was responsible for swearing his clan to fight evil for eternity.

Superhuman Physical Characteristics, Supernatural Senses, Martial Arts Mastery, Weapon Mastery, Self-Sustenance (Type 1:Can survive without oxygen), Immortality Negation (Types 3 and 7, as a wielder of the Vampire Killer, he should be capable of killing Dracula, however unable to sever his connection to Chaos), Regeneration Negation (At least Low High, possibly Mid-High, capable of successfully hurting Dracula, who can come back from a mass of blood and possibly being reduced to vapor), Attack Reflection and Power Nullification (The Belmonts can completely nullify or reflect magic, projectiles and abillities used against them through their power and the Vampire Killer, The Vampire Killer through its presence alone weakened Dracula's disembodied Soul and powers so much that he was unable to resurrect himself or escape from the sealed castle for several years), Non-Physical Interaction and Soul Manipulation (Can attack and destroy Souls directly, can interact with intangible beings like Ghosts), Magic, Can manipulate air by wielding weapons, Fire Manipulation, Holy Manipulation, Forcefield Creation, Has other whips with fire, ice and thunder elements, Energy Projection, Can render himself invisible or invulnerable for a small amount of time, Statistics Amplification, Can stun enemies, Healing, Limited Immortality (Type 8, via Death Doll, which will keep him alive dying in his place, however it can only be used once), Danmaku (With Blade Serpent) and Homing Attack (Via Energy Wave)

Attack Potency: At least Multi-Solar System level, possibly Universe level+ (Defeated Death, should be not too far from Dracula and other Belmonts)

Speed: Relativistic (Capable of keeping pace with and matching Death)

Range: Extended melee range to tens of meters with the whips, higher with throwing sub-weapons and some magics. Possibly Universal+ with Vampire Killer's Negation

Intelligence: Very High (The knight of a noble house, and a legendary crusader general)